It may even allow foreign investors to hold majority stakes in local operations on condition that part of their output is reserved for domestic downstream industries. 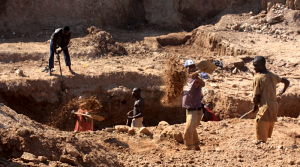 Zimbabwe’s government is letting two new private companies mine diamonds in the country and may even allow foreign investors to hold majority stakes in local operations on condition that part of their output is reserved for domestic downstream industries.

Chitando didn’t name the two new diamond firms, but the other two diamond-mining companies already operating in Zimbabwe are Murowa Diamonds, a unit of RioZim, and the state-owned Zimbabwe Consolidated Diamond Mines.

Vast Resources and Botswana Diamonds are currently exploring at their concession in the African nation’s Marange Fields area, in partnership with a local community trust.

Last week, Chitando said the government would not remove a limit on foreign ownership for diamonds and platinum, but now said it’s considering waiving a requirement for diamond mines to be 51% owned by locals on a case by case scenario.

The move seeks to revive the country’s diamond industry. The country expects to produce 12 million carats by 2023, compared with a forecast of 3.5 million carats this year.