Plans by the government of Zimbabwe to export as many as 35 baby elephants to China has sparked an outcry among wildlife conservationists who say proper procedures haven't been followed. 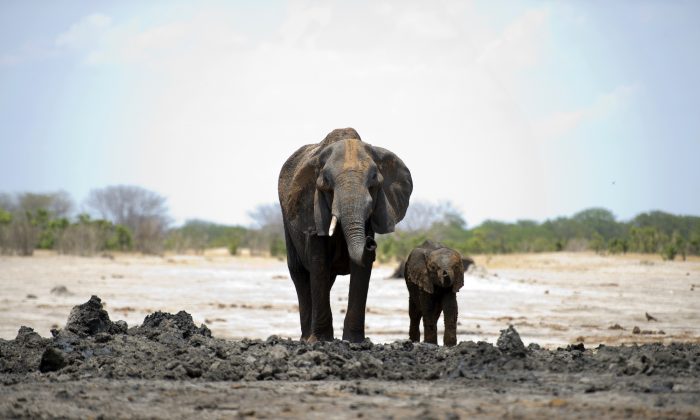 An African elephant and her baby are pictured on Nov. 18, 2012, in Hwange National Park in Zimbabwe. (Martin Bureau/AFP/Getty Images)

MUTARE, Zimbabwe—Plans by the government of Zimbabwe to export as many as 35 baby elephants to China has sparked an outcry among wildlife conservationists who say proper procedures haven’t been followed.

They also raise concerns about China’s significant role in the global trade in endangered species.

Investigations by wildlife protection activists reveal that the baby elephants, some as young as 2, were separated from their mothers and are being held in pens at Zimbabwe’s Hwange National Park while preparations are finalized to send them to China, where they will be put in zoos.

The export plan has been roundly condemned by local and international wildlife conservationists, who say the removal of young elephants from the herd is highly damaging—not only to the young elephants but to the entire herd.

According to Sharon Hoole, a Zimbabwe animal rights activist with the U.K.-based group Bring Back Our Rhinos, the Wildlife Act stipulates that certain criteria must be followed before wildlife can be sold, and the government hasn’t adhered to that.

“There’s supposed to be public stakeholder consultation, parliamentary consultation. … Even during the capture they have to meet a criteria where representatives of citizens, stakeholders, and animal welfare services have to be involved,” Hoole said in an interview.

“This capture and export of the baby elephants is illegal because these criteria haven’t been met, but they don’t care about that because they know no one will do anything. So we have to do something.”

Wildlife expert Mike Hitschmann, who runs the Cecil Kop Nature Reserve, said a big concern is that China has one of the world’s worst track records when it comes to the illegal trade in endangered wildlife species.

According to the U.S.-based Wilson Center, experts say the Chinese demand for wildlife products is driving the global trade in endangered species. The experts said many wild animals, particularly tigers, bears, and rhinos, are farmed en masse in China and treated inhumanely. Tigers are bred for the production of luxury items like tiger bone wine and tiger skin rugs, and bears are “milked” for their bile for use in traditional Chinese medicine.

Hitschmann said China’s relationship with Africa is another part of the problem, it’s one of blatant neocolonialism, which flourishes in countries that have questionable governments and gives Beijing the upper hand.

“Zimbabwe is no exception and basically whatever the Chinese want or need they can now get it—whether it be our mineral resources or our natural resources in the form of wildlife,” he said.

“With the advent of the new government under President Emmerson Mnangagwa, there has been no improvement. In fact, it appears as if the situation is worsening.”

Hitschmann said that from the time the Chinese presence first started to increase in Zimbabwe, most of the country’s reptile species, such as tortoises and turtles, as well as rhinos, have been negatively affected. Now it’s elephants, and he’s worried about the populations dwindling.

Tinashe Farawo, spokesperson for the Zimbabwe Parks and Wildlife Management Authority, denied the government is capturing baby elephants for export to China.

“We are known for being leaders in wildlife conservation and we cannot capture baby elephants for export,” he said. “We can only capture sub-adults—that’s if we want to capture any elephant at all [for export]. We only capture young adult elephants which are no longer dependent on their mothers. But in this case, we are not doing that.”

“We last culled the elephants in 1987 and the numbers are growing, hence we are experiencing conflicts between humans and elephants. About five people have been killed by elephants this year,” he said.

However, Hitschmann said claims of over population are false and are being used as a basis for opposing the worldwide ban on the ivory trade and to justify the removal of elephant calves from the wild for export to Chinese zoos and theme parks.

According to the Humane Society of the United States, this is the fourth time since 2012 that Zimbabwe has captured baby elephants for export to China—a total of 108 elephants—despite broad opposition.

Hitschmann said other issues for Zimbabwe’s elephants are poor management practices that have allowed for increasing human encroachment on protected areas such as national parks, and poor political decisions that have resulted in less available land overall for wild animals.

He believes effective wildlife management requires “out of the box” thinking, such as if one particular area has a high elephant population that threatens the biodiversity, then herds can be relocated together to areas where there are no elephants, including other countries in Africa.

“In this way, we do our bit to slow down their overall population crash, it keeps the elephants in Africa which is their environment, and it makes good business sense because we need tourists to come and visit elephants in Africa—not in China.”