HARARE (Thomson Reuters Foundation) - As eastern Zimbabwe struggles with the aftermath of floods that have killed nearly 270 people and destroyed homes and roads, other parts of Zimbabwe are facing a very different crisis: too little water. 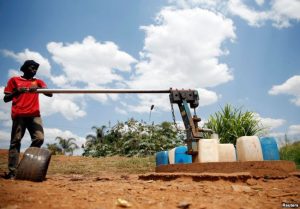 FILE – A man fetches water from a communal water point in Harare, Zimbabwe, Nov. 19, 2018. Water rationing is nothing new in Harare, but not in March. It more commonly begins months later, residents say.

Lake Chivero, the main source of water for the capital Harare, is at just 60 percent of its usual capacity at this time of year, following poor rains, said Richard Kunyadini, Harare City Council’s water manager.

The city’s two other dams, Harava and Seke, are just 7 percent full, he said.

For residents such as Letwin Bhamusi, 43, that means water is now arriving through the pipes only once a week, under a new water rationing schedule put in place in early March by Harare’s authorities.

Water rationing is nothing new in Harare – but it more commonly begins months later, residents say. Shortages, they say, hit the poor – who cannot afford to dig private wells – hardest.

The cutbacks mean Bhamusi can’t water her garden, a source of vegetables for her family, and must now spend valuable time each day looking for alternative sources of water.

“We are only in March. At this rate, we might soon never see a drop of water in our homes,” the resident of Hatcliffe, a high-density suburb of Harare, complained bitterly.

Climate change is bringing more weather extremes around the world, and Zimbabwe this year is suffering from opposite crises at once: deadly flooding and bitter drought.

In far eastern Zimbabwe, Cyclone Idai, which blasted ashore in Mozambique, has pounded Chimanimani and Chipinge districts and parts of Masvingo district, causing flooding and mudslides and forcing people from their homes.

But elsewhere in Zimbabwe, weak rains this season have left water reservoirs low in parts of the country, reducing production of hydropower from Lake Kariba – a major energy source for Zimbabwe and neighbouring Zambia – and water available to families and farmers.

“The capacity of our lakes is very low with two of our dams, Seke and Harava going dry at 7 percent (capacity). We can no longer extract water from them,” said Kunyadini, the Harare city official.

“Until we get more water or rains, we must rely on Lake Chivero but that is not enough – hence the rationing,” he said.

Between last October and February, the level of Lake Kariba fell by over 3 metres (10 feet), the Zimbabwe River Authority said in a statement, forcing cutbacks in power generation.

Meanwhile, officials feared some reservoirs in eastern Zimbabwe could burst after heavy rain and runoff.

“The cyclone has affected our dams in a negative manner. Most of them cannot withstand the highest water levels beyond their capacity,” Mutasa Tatenda, a climate change scientist with the Ministry of Lands, Agriculture, Water, Climate and Rural Resettlement, told the Thomson Reuters Foundation.

He said the uneven distribution of rainfall in Zimbabwe was affecting everything from farming and households to power production, manufacturing and recreation.

Mutasa warned that warming temperatures, and changes in precipitation as a result of climate change are affecting the country’s water supply and quality.

He called for efforts to promote efficient water use and water conservation in all parts of the economy, and an increase in measures such as water harvesting and preservation of wetlands.

According to a 2015 World Bank paper, climate change is expected to cut per capita water availability in Zimbabwe by as much as 38 percent by 2050.