A shortage of foreign exchange is forcing more and more private firms to shut down. 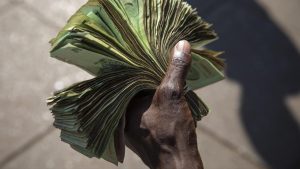 Oliver Mtukudzi, Zimbabwe’s most famous cultural icon and Afro-jazz pioneer who passed away in January, was in the 1990s the face of Olivine Industries, a manufacturer of oilseed products, laundry and toilet soaps. The company’s commercials featuring Mtukudzi made Olivine’s cooking oil a household brand in the southern African nation. But this January, the Harare-based firm closed its operations, a victim of the country’s deepening foreign exchange crisis.

Incorporated in 1950, Olivine was one of Zimbabwe’s oldest companies, and was partly backed by the government, which holds a 35 percent stake in the firm. Yet it couldn’t get foreign exchange from the country’s reserves after trying for months, leading to a $11 million debt to foreign suppliers from whom it sourced raw materials, eventually forcing its shutdown. Olivine’s sudden demise is a story increasingly resonating across Zimbabwe’s private sector at a time it was expecting hope.

When longtime leader Robert Mugabe was forced out of power in November 2017 after presiding over the economy’s destruction, hundreds of thousands of Zimbabweans had celebrated in the streets. The country’s economy, they were confident, couldn’t get any worse under President Emmerson Mnangagwa, the former spy chief and vice president who replaced Mugabe. But 15 months later, those hopes appear dashed, with private companies shutting down faster than even in the final months under Mugabe, faced with a crippling shortage of foreign currency with which to buy raw material.

Between November 2017, when Mnangagwa took office, and December 2018, 55 registered companies shut down, 10 percent higher than the 49 that closed shop over a similar period at the end of the Mugabe era, according to the Master of the High Court’s office. (Companies must formally seek liquidation at the office.) And that’s only a snapshot of the crisis — most of Zimbabwe’s economy is unorganized, with only 65 firms publicly listed on the stock exchange. Some companies, like Olivine, have stopped operations, but haven’t dissolved. According to Confederation of Zimbabwe Industries (CZI) President Sifelani Jabangwe, a shortage of foreign exchange is the biggest reason for firms closing down.

The worsening crisis threatens to kill global hopes of an improved Zimbabwean economy that could staunch the flood of economic migration from the country. Instead, Human Rights Watch is warning of a fresh humanitarian challenge if more Zimbabweans flee to neighboring nations. The crisis is also rapidly denting Mnangagwa’s efforts to portray himself as Zimbabwe’s savior, at a time the country is restless to move beyond the stagnation of the Mugabe years, say experts.

“The new dispensation came on the basis that they were going to focus on the economy,” says Godfrey Kanyenze, director of the Labor and Economic Development Research Institute of Zimbabwe. “But it has not improved. We are not going anywhere.”

On paper, Reserve Bank of Zimbabwe (RBZ) statistics suggest foreign currency generation is rising — it went up by 13.5 percent between 2017 and 2018 to reach $6.3 billion. But trade and fiscal deficits have grown much faster, eating into those foreign exchange reserves, making less available for the private sector.

And that’s only part of the picture. Most countries that import substantially more than they export occasionally face foreign exchange shortages. But Zimbabwe faces challenges those other nations don’t. Rampant corruption and financial mismanagement have so eroded the credibility of the country’s banking system that Zimbabweans abroad are sending home less money than even under Mugabe. Incoming remittances — a major source of foreign exchange — dropped by 18 percent, from $1.37 billion in 2017 to $1.12 billion in 2018. Many Zimbabweans who earn in foreign currencies refuse to trust the formal financial system with that money, instead keeping it as cash — thereby restricting its access to the broader economy. The RBZ estimates that there’s $2.5 billion in foreign currencies circulating in the economy in all — and of that, $1.74 billion is in the informal market. When companies in other countries face dollar shortages, their foreign partners usually bail them out for a while, by lending foreign currency or agreeing to wait for delayed payments. That trust in Zimbabwe’s economy is missing for most foreign firms.

Public transportation drivers complain about having to pay for fuel in U.S. dollars at a fuel station in Harare.

“Currency has been an issue for the last eight months since August,” says Sylvester Mangani, Olivine’s acting CEO. “Our foreign suppliers have helped by extending credit to us, but we are now having issues in paying them back.”

Olivine isn’t alone. On March 4, Zimbabwe suffered a severe internet and mobile network blackout. Investigations by the Postal and Telecommunications Regulatory Authority of Zimbabwe revealed that the country’s telecommunication firms had failed to pay foreign partners — in particular Huawei and ZTE from China, and Ericsson from Sweden — their dues for infrastructure maintenance and servicing. Econet Wireless Zimbabwe, the country’s biggest telecommunication company with 8.5 million active subscribers, owes Ericsson about $40 million that it is struggling to repay because it can’t access foreign exchange. Cement manufacturer PPC Zimbabwe in its interim financial results in September 2018 showed that it owed its parent firm, the South Africa–based PPC Ltd., $64.2 million that it wasn’t able to pay without foreign currency. It’s little surprise, then, that in the United Nations’ latest global happiness rankings, Zimbabwe dropped two places to 146 out of the 156 nations that were reviewed.

For sure, the Zimbabwean government is taking steps to improve access to foreign currency. In 2009, faced with hyperinflation of 79 billion percent, Zimbabwe had abandoned its currency and introduced a multicurrency mechanism in which the U.S. dollar became the favored means of payment. But with the dollar in short supply, inflation once again skyrocketed in recent months, and the new government went back to the local currency in February.

The government has also created an interbank foreign currency trading platform where the local currency, called the real-time gross settlement (RTGS) dollar, can be traded for U.S. dollars. The idea is to allow companies to source the U.S. dollar themselves, instead of needing to rely on banks and the RBZ. The central bank estimates this could bring the $1.74 billion from the informal economy into the mainstream. Initial signs suggest the approach is working, says RBZ Governor John Mangudya, who says there were $45 million in trades in the exchange’s first three weeks, while acknowledging his country is in transition “Rome was not built in a day,” he adds.

The RBZ introduced an official rate of RTGS $2.5 to U.S. $1 for the official market in February — it has since slipped to 3.05-to-1 — with the aim that it would eventually merge with the exchange rate on the parallel market. But the rate on the latter (4-to-1 in February) has also fallen. For all of Mangudya’s optimism, the CZI reported in March that “the interbank has not performed to the expected levels.”

Economists and analysts argue that while the creation of the interbank platform makes sense, the government has erred by adopting a currency without significant reserves to back it and by fixing an official exchange rate. Because most of the foreign currency is available only in the parallel economy, there’s little incentive for those holding that cash to sell it on the official exchange in return for a lower RTGS$ rate. What Zimbabwe needs is “price convergence or a more efficient price discovery mechanism,” says Persistence Gwanyanya, a financial analyst.

These errors, suggests Kanyenze, are the outcome of the Mnangagwa government “rushing with policy after policy,” often “without even national dialogue.” Allowing the market to freely set the exchange rate would at least partly solve the problem. Relinquishing such control won’t come easy to Mnangagwa at a time he’s trying to establish his authority. At stake is the future of Zimbabwe’s economy — and his own legacy.