(Bloomberg) - A plan to build Zimbabwe’s biggest platinum mine at a cost of about $4 billion is floundering because a military stake in the project has deterred potential backers, according to people familiar with the funding discussions. 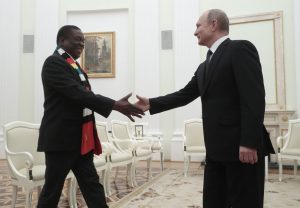 The African Export-Import Bank has the mandate to raise money for the mine, a joint venture between Russian and Zimbabwean investors. While the bank provided $192 million of its own funds, meetings in the past year with investors including South Africa’s Public Investment Corp., the continent’s biggest fund manager, failed to bring additional commitments, one of the people said, asking not to be identified because the talks are private.

Zimbabwe has the world’s third-largest reserves of platinum, palladium and related metals such as rhodium — which typically occur together — after South Africa and Russia. President Emmerson Mnangagwa is trying to lure investment to the country to help rebuild the economy, devastated during the 37-year rule of Robert Mugabe.

The sticking point is a Zimbabwe military company that once was subject to U.S. sanctions. Zimbabwe Defence Industries Ltd. and Zimbabwe Mining Development Corp. together hold 30% of the joint venture, known as Great Dyke Investments, through Pen East (Pty) Ltd., a company they control, according to documents seen by Bloomberg.

Vi Holding, led by Russian entrepreneur Vitaliy Machitski, has a 50% stake in Great Dyke, and 20% is held by undisclosed Zimbabwean investors, the documents show. While the documents are dated 2012, the shareholdings are about the same today, two of the people familiar with the discussions said. The $4 billion figure is a government estimate of the cost to develop the mine and associated infrastructure.

“If there is any kind of military shareholding it will make western investors very uncomfortable, especially the banks,” said Peter Major, a mining analyst at Mergence Corporate Solutions Ltd. in Cape Town. “Who is going to risk it? I think they will battle to get funding from traditional and western institutions.”

South Africa’s PIC said while it doesn’t comment on proposals or potential transactions it is “comfortable” with Afreximbank’s governance. Zimbabwe’s defense ministry, ZDI and Vi Holding didn’t respond to phone and email requests for comment.

The U.S. Treasury imposed sanctions on Zimbabwe Defence Industries, or ZDI, and several politicians in 2004 because of violence and irregularities in the nation’s 2000 and 2002 elections. Vi Holding groups Russian companies including state-controlled Rostec Corp. and development bank VEB, according to the people. Both companies also have been sanctioned by the U.S. because of Russia’s 2014 annexation of Crimea.

Global Witness has previously tied ZDI to diamond mining in eastern Zimbabwe through an indirect shareholding in a Chinese company. Mugabe said his government lost large sums to theft from that deposit, and Human Rights Watch in 2009 accused the military of shooting and killing 200 miners there.

This wouldn’t be the first time military involvement thwarted a mining project. In 2000, Oryx Diamonds Ltd. scrapped plans to trade in London after its adviser withdrew support under pressure from the U.K. government. Oryx had planned a diamond mine in Democratic Republic of Congo with investors that included another Zimbabwe military company at a time when Mugabe’s forces were fighting in Congo.

Mugabe handed the Great Dyke concession to Russian investors in 2006 after the government repossessed land from a unit of South Africa’s Impala Platinum Holdings Ltd., or Implats. The first joint venture to try to tap the deposit was Ruschrome Mining, according to the Zimbabwean government. Vi Holding took over Ruschrome’s shareholding in 2014, the people said.

An offer about eight years ago by a “large international mining house” to buy out Pen East from the project for $30 million was rejected, according to a proposal prepared by CDF Trust & Consulting BV, a Zimbabwean consultancy, that was seen by Bloomberg. CDF Trust Managing Director Caleb Dengu declined to comment.

Agreements signed by Great Dyke, Afreximbank, Vi Holding, the Russian Export Center and African Finance Corp. to develop the mine were exchanged at a meeting between Russian President Vladimir Putin and Mnangagwa in Moscow in January.