A freight train came off the rails in central Mozambique on Wednesday, killing four passengers and leaving six unaccounted for, an official source has told Lusa. 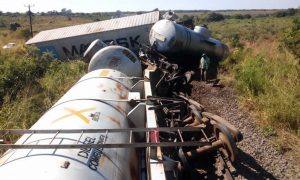 The missing passengers are believed to be somewhere in the debris of overturned wagons.

Those aboard the train included two operators, one driver and 24 private security agents, of whom nine sustained injuries in the crash.

The train, travelling from Beira port to Zimbabwe with 29 wagons and three tankers, was carrying food, solar panels and fuel, and derailed at about 8:30 a.m.