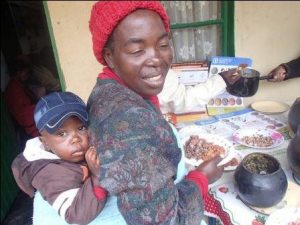 Farisai explains to Emma that it is her lack of money which necessitates her daughter Rudo having to live with her mother, a widow, 100-odd miles away in Mutoko because she can’t afford even a few dollars a month to pay for a childminder when she is at work.

“Rudo has lived with Ma almost since the day she was born, well before she was weaned,” says Farisai. “It takes me three or four months to save the round-trip fare to come and visit them for just a few days, and I have to use up my annual leave to do so.

“And today, as usual, my bags are filled with what I have managed to scrape together since my last visit to help feed and clothe my beautiful Rudo.” She opens her bags to show Emma a mishmash of second-hand clothes and plastic toys, a random bag of onions, a few sweets and the heaviest, containing a big sack of mealie meal.

As they talk, Farisai reveals the complexity of her marital arrangements. Her husband is a doctor at the hospital where she works. He is still married to his first wife and is about to marry a third: Farisai is the one in between. Some ten years into his first marriage and having fathered five children, her husband began seeing Farisai and brought her home to live with him. After a while, and at her prompting, he started the process of exchanging gifts with Farisai’s family in order to formalise the process of her becoming his second wife. However, the arrangements were never completed because, soon after Rudo was born, he began seeing someone new, a woman still in her teens.

When the newest bride arrived, Farisai was instructed to leave his bedroom and move into the room his first wife was now occupying, joining as many of her children as were able to sleep there; the house had only two bedrooms. The arrival of the third wife coincided with the doctor’s starting to assault Farisai physically.

“Recently,” said Farisai, “the beatings have become more frequent,” and she lowered the nape of her dress to show Emma the bruising round her neck and arms to prove the point. Emma gasped in horror and grabbed Farisai’s hand. Farisai turned to her and attempted a smile; Emma had tears in her eyes.

“My husband was not the first man to abuse me,” said Farisai, whose confidence in telling Emma even more upsetting things about her life had been boosted on seeing her tears.

“No, the first time happened when I was just 14 and I was forced to sleep with one of my teachers. It was terrible: he kept demanding me and there was nothing I could do to stop him. What’s more, it happened to other girls in my class as well. And if you don’t know, it still happens all the time here. Everyone knows but no one seems to care enough for it to be stopped. If you want to pass your exams you have no choice.”

As Farisai shared more of the increasingly grim story of her life, Emma marvelled even more at her cheerfulness. For all she had gone through in the past and for all her current problems, she had not given up. Indeed, what shone through was her toughness, her resilience in the face of such hardships – and on top of all that a cheery, even bubbly, disposition. Farisai expressed little bitterness; in fact, she seemed to exude a stoic optimism which Emma found remarkable.

As they draw nearer to Mutoko, where Farisai is getting off, Emma’s mind begins to race. Should she give Farisai her contacts; should she give her some money? Above all else, Emma knows what she really wants to do is simply to give Farisai a huge hug, to wish her well and thank her for sharing so much with her, the stranger on the bus. But Emma knows these instincts come from a different way of interacting; they are driven by different cultural norms. A moment ago, Emma had felt so close to Farisai; now she feels so distant from her. She wants to wrap her arms around her in the warmest of embraces but she knows she can’t. Instead, as Farisai is about to rise to say goodbye Emma holds out her hand. Farisai takes it and, before gathering up her things, pauses, smiles and says nothing except to wish Emma well for the rest of her visit. It is her eyes which speak what Farisai feels deep inside: gratitude. For Emma, that look in Farisai’s eyes considerably eases the pain she feels in her chest for not having been able to give her the hug she had so wanted to impart.

Then, as she prepares to leave, Emma thrusts two $10 notes into Farisai’s hand.

On feeling the dollar bills but not knowing their value, Farisai says, “No, you keep that for yourself, I’m fine, really. It’s been good just to talk.”

“Please,” says Emma as she presses both her hands over Farisai’s, “You really must take it, I insist.”

Farisai folds the money up then tucks it inside the front of her dress before sweeping up her parcels and running down the bus.

“Thank you, again, Emma,” she says again, straining to raise up her heavy bags as if she is trying to wave, saying respectfully “Stay well.”

“Go well,” replies Emma, but Farisai has already jumped off and is gone – from the bus, and from Emma’s life.

As a journalist, Emma had listened to many stories of human hardship, but Farisai’s touched her more than almost the all others she had heard. She knew giving Farisai money would at least ease her pain for a moment, but she also knew it wouldn’t solve any of her problems. That was far tougher. Then she thought back to the previous night’s conversation and Simon’s telling her that giving to charity without trying to solve the problems which necessitate the need to give was a cop-out. She then realised why she was feeling so guilty.

This is the second in a series of extracts from Tapestries of Difference, a novel  by Roger Riddell. In an exclusive agreement with the author and Powerhouse Publications, The Zimbabwean will be publishing a series of extracts from the book over the next several weeks.  Tapestries of Differences is available in both paperback and kindle form from Amazon UK and Amazon.com. It can also be ordered direct from Blackwell’s bookshop Oxford, UK.