I thought we had seen everything that this country of ours could throw at us, but the situation right now looks like nothing we have seen before. Prices have quadrupled and continue to rise inexorably, incomes remain fixed or at least only 15 to 30 per cent higher for people in paid employment, fuel is still short or expensive and now massive electricity cuts. At my place in Harare we are out of electricity for 15 to 18 hours a day, every day. 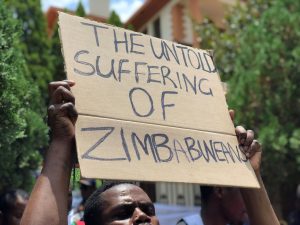 Personally, I started to pay for my long term security with a major pension company when I was 17 years old, my father having told me you have to have an insurance policy. Eventually my portfolio was 5 policies – all with the same company, the biggest in the region, and I had contributed in one way or another well over a million US dollars to this company for my personal security once I retired.

Today this company, proudly sends me an e mail each month saying we have paid your pension into your account today in the amount of RTGS$94.00 (that is about US$10.00). A cup of coffee costs RTGS$8 to RTGS$12 in local coffee shops.

I met with a small group of student leaders on Saturday and they asked me all sorts of questions – one thing I told them was never pay into a pension fund. But really, what kind of a future can we offer our brightest and best young people if we cannot maintain the most basic economic ingredients for growth? What sort of future faces them and how do that prepare for that future? For most of them the future is a passport.

At Church on Sunday, one of the larger aid agencies told me that they were gearing up to provide basic food to 5 million people in the rural areas but were now thinking they might have to start a program in urban areas where absolute poverty and hunger were becoming a major issue. If you cannot provide food and fuel to your people, we are, as far as many people are concerned a “failed State”. How else do you describe what is happening?

But the reality is that we are far from a failed State, our fiscal surplus in the first quarter was $500 million, we are accumulating hard currency in our banks, for the first time ever, the balance of payments is strong, so why the crisis? Let’s look at each problem one by one.

Firstly, food: 20 years after the Government launched the “Fast Track Land Reform Program” and three years after “Command Agriculture” we are still importing the great majority of our food, food prices are high by regional standards and our poorest people (who are 70 per cent of the entire population) cannot afford to buy their essentials for daily life. Why? We have plenty of land, water to irrigate a million hectares of crops, we have the expertise and most of the equipment needed – what’s missing? Two words – real farmers.

In the USA 3 per cent of the population lives on farms, in Europe perhaps 5 per cent, in South Africa 70 per cent of all food is produced by 100 companies, in Zambia a small community of less than 1000 farmer’s make that country a net exporter on a large scale. What they all have in common is the respect of their countries for the contribution they make and security. Personal security and security over assets which enables them to borrow massively from the banks to cover short term costs and capital equipment. Here none of that applies and it’s just a matter of changing our policies.

Secondly, Fuel: In 2009, in a fifteen-minute statement we liberalized – floated our currency, removed all import restrictions, removed all controls on gold production and sales and dismantled price controls. In 10 days’ fuel supplies were freely available at world market prices, no allocations of foreign exchange from the Reserve Bank, no subsidies, no State controlled imports. Just private sector and free markets – “publish your prices on the forecourts” was all we had to do and leave customers to decide where to buy their fuel from.

2013, we reversed those decisions, restored controls and State intervention, made the Reserve Bank the main trader in foreign exchange and we allowed monopoly interests to take control of the fuel industry. Instantly we were back in 2008, fuel shortages, high prices, well above regional and international levels and constant disruptions and shortages of foreign exchange. What do we have to do – unscramble the egg, go back to basics. Do not tell me we do not know what the solutions are – we do, it’s just the will to do the things that are necessary. What mechanism was behind the 2009 announcement by Chinamasa? A simple resolution in Cabinet, the day before.

Thirdly, Electrical Energy: We have made a start, we fired the top management and the Board, but that is just the start. This sector is an unholy mess. We have just spent, between Zambia and ourselves nearly a billion dollars on doubling the capacity of Kariba – with no increase in water supply? We have then allowed the dam to operate well above capacity because the power coming out was cheap and available and as a country with full supply at low prices, we went to sleep. Now – disaster strikes as the inevitable happened – we ran out of water.

Then at Hwange, where we built a huge thermal power station nearly 60 years ago, we have been paying little attention to coal supplies. Hwange Colliery with millions of tonnes of coal reserves, is running out of coal? They have perhaps six months left in the open cast mine and Hwange Power Station must rely on private sector operations. The conveyor system, the drag line, tens of millions of dollars of plant and equipment is broken down and crude, out of date methods of mining are being employed at much higher cost.

Our currency collapses and we do not increase prices for coal. Are we then surprised that the coal stops coming? Are we crazy? We have spent tens of millions of dollars on the three small thermal stations with less capacity than one turbine at Hwange. Hwange uses thermal coal at half the cost of other forms of coal which are used in these old stations, who in the world spends money on coal fired stations that were built in the 1920’s and 30’s?

We need new power sources – every home should have solar panels on the roof. Solar can supply our needs during the day – without storage, at very low costs. Let’s get an emergency program under way. We need a new major thermal power station that uses coal – let’s make it happen, its private sector driven, keep it that way but support them financially, its only money. And for heaven’s sake, raise the price of power to reflect current costs. The only short term solution is to import power and for that to happen we have to pay for the stuff.

Finally, Prices: I say prices because what we have right now is not inflation in the normal sense – its price rises driven by speculation in our currencies. This is fueled by the Reserve Bank with its mismanagement and manipulation of the interbank market and the foreign exchange system as a whole. The ability of the private sector (or speculators) to make a margin, sometimes a massive margin, on simple currency deals every day is just too great at the moment and the only way to stop the practice is to enlist the market.

We know how to do this – do we think we are the only country in the world that has had this problem, if we do we are stupid and I do not think that is the case. We must make it expensive to secure supplies of local currency by raising short term interest rates to a punitive level. We must make the official, interbank market for foreign exchange work so that the exchange rate in the Banks has credibility and when we want foreign currencies, we can buy them and remit them to clients and suppliers outside the country. We cannot do that if the Reserve Bank is allowed to unilaterally take foreign currency out of our bank accounts for their own use and replace it with local electronic currency at a false exchange rate. Make all Banks sell the foreign exchange that is available on the interbank market every day and allow people to buy from the market through their banks what they need. The exchange rate will strengthen and prices will go down, automatically. Is that so difficult to understand and do?