The nation was shocked at the gazetting Statutory Instrument 142 which basically reintroduces the Zimbabwe dollar, even in the absence of addressing the economic fundamentals to support the local currency. 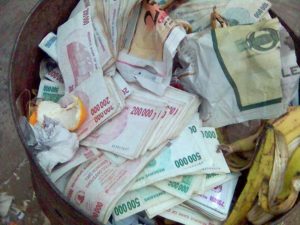 Despite government’s promise that it would introduce a new Zimbabwe currency in the next nine months while it addresses the fundamentals, the regime today just ambushed the nation and reintroduced the Zimbabwean dollar as the only legal tender in local transactions. This means that the multi-currency regime, which provided some modicum of decency and predictability, has been thrown out of the window in favor of the volatile local currency that is not backed by adequate gold and foreign currency reserves.

In spite of SI 142, it is important to state that trust and confidence, which any transacting public must have before they use a currency, cannot in themselves be gazetted.

Today’s decision shows the lack of coherent, prudent and predictable policy, which is important to retain trust and confidence in a country’s economy. Policy consistency and predictability are key tenets for any economy to succeed.

It remains to be seen how the market will respond to the madness, but the knee-jerk monetary policy introduced in the dead of the night is reminiscent of the rushed decisions of this regime. The fuel price increases announced by Mr Mnangagwa himself in the dead of night and that caused a furore in the country’s economy are a case in point.

With the current madness in government, it is important to state that the people reserve their right to express their displeasure at the free-falling economy and the knee-jerk policies that those in authority introduce when they so wish.