In Zimbabwe, an initiative to set up a massive wildlife conservancy and historical tourism venture that would benefit the local community, as well as contributing to the revival of tourism and the economy by attracting international tourists, is on hold. 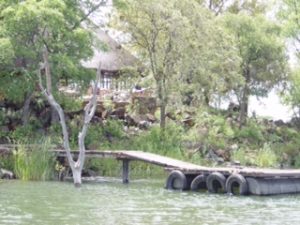 BEFORE: Built in the 1990s, the idyllic thatched stone lodge on Dave Joubert’s Bembesi Conservancy in Zimbabwe was popular with local, regional and international guests due to the outstanding fishing, game viewing and birding opportunities offered from its waterfront site.

The combined farm and safari operation, which is integral to the project and would generate vital foreign currency, continues to be illegally occupied by members of the Zimbabwe Republic Police (ZRP) who took it over by force in July 2007.

Their ongoing occupation is in flagrant disregard of a confirmed court order of September 2007 compelling them to vacate the farm and return it to its lawful owner, Dave Joubert, a high profile Matabeleland farmer of approximately 50 years, and owner of Portwe Estate since 1982.The failure of the government to remove the police from Joubert’s Portwe Estate and Bembesi conservancy demonstrates that Zimbabwe is not “open for business”, as President Mnangagwa claims. 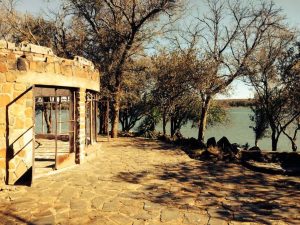 AFTER: The remains of the Bembesi lodge lounge after it caught fire during a drunken party organised by members of the Zimbabwe Republic Police who invaded and took over the productive, privately-owned Portwe farm and Bembesi conservancy in July 2007. Police officers continue to occupy the farm in flagrant disregard of a September 2007 court order stipulating that they vacate the farm with immediate effect.

This visionary project involves Paramount Chief Nhlanhla Felix Ndiweni, whose father, the late Paramount Chief Khayisa Ndiweni, endorsed the initiative, together with the then governor, Welshman Mahbene. Chief Felix Ndiweni has risen rapidly to prominence in Zimbabwe since returning from the UK to take up the hereditary chieftainship.  He was sent to London in 1981 to study for a degree in engineering technology and mechanical engineering, and lived in there for more than 20 years. He also has degrees in management studies, specialising in local governance, and law. He is committed to bringing independence and an end to poverty to his people through individual property rights.

If the police and the Mnangagwa government continue to defy the law and the Zimbabwe constitution, there will be implications regarding the government’s re-engagement with the International Monetary Fund (IMF), the World Bank and the European Union. With the economy in the grips of a meltdown, kilometre-long fuel queues, devastating power cuts and rapidly rising inflation, President Mnangagwa has said that restoring ties with the West and multilateral lenders, including the IMF, is one of his priorities.