Female Zimbabwean from Britain treated as an honorary male and the happiness of the extended family. 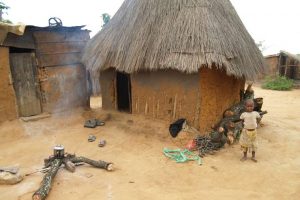 Emma’s feelings of normality were reinforced by the final three days she spent with her extended family. This was in part because here she was living at close quarters with the only group of people in the world who knew who she really was.

Prosper had arranged a visit to the school where he had just retired as headmaster after almost two decades, a two-streamed primary school which had originally been established as a Catholic school but was now state-run. They went into every classroom in turn. There she was welcomed by a sea of smiling faces, bodies sitting squashed together on rickety wooden benches, forty or more in each class, she reckoned.

Emma was shocked to see how dark and bare the classrooms were: some torn pictures on the dusty walls but few books to be seen. She asked whether the school had any computers and was pleasantly surprised when the new headmaster proudly told her they had three. He took Emma into his office and pointed to three unopened cardboard boxes piled on top of each other in the corner, explaining they were given to the school two years ago by an Italian charity with links to All Souls hospital.

“Why are they still lying there unopened,” enquired Emma curiously?

“Because there is no mains electricity and the school cannot afford to buy a diesel-engine generator to run them,” came the reply.

They certainly had computers but not a single child had yet been able to make use of them. Oh, mused Emma to herself, what basic mistakes the aid industry still makes.

They returned from the school via the store-cum-butchery which Emma had passed on her initial bike ride with Francis. Prosper introduced Emma to everyone there, explaining proudly she was a Makoni but had grown up in England and was now a Londoner. They were greeted warmly by all they met – Prosper was not merely widely known, but, as a former headmaster, clearly a person of some standing in the community.

Though delighted by their friendliness, Emma began to feel out of place as she realised almost all the people she was being introduced to were men and she was being watched. Indeed, in some ways she felt her coming from faraway, the different clothes she wore, her looks, her bearing and mannerisms and the self-assured way in which she spoke with the men she met all converged to produce a most disturbing outcome: she was being viewed as more male than female.

As she now began to think about it, this was in part how she was received by the Makonis. Since arriving, she had spent far more time with Prosper and Francis than with the others and when eating she had never once been invited to sit on the kitchen floor and eat with the other women. It is true Emerentiana had also sat with her but she had rarely spoken and never, Emma now thought, as an equal. Emma had never before experienced being treated as male and it made her feel uncomfortable.

These feelings, however, quickly disappeared whenever she spent time with her cousins, which she did when they came back from school and on the Saturday. They played hopscotch together and were surprised how good Emma was at the game. They taught her how to play tsoro, a do-it-yourself game for two played by picking up a pile of pebbles and dropping them one by one into holes dug into two rows in the earth in front of each player. The game ends when one player has won all the pebbles off the other players. It looked easy but, try as she might, Emma soon realised she was no match for her cousins: even the-eight-year olds, Spiwe and Stella, beat her every time.

They spent many hours of fun dancing together. One time it was traditional dancing with Tafara drumming. She rhythmically beat the inside of her wrists first on the outside edges and then on the centre of a tall drum, while Chipo accompanied her with her hand-made rattle (hosho) and everyone else shrieked with laughter as Emma faltered before eventually learning the traditional dance steps they were teaching her. When that was finished, they were delighted when Emma said she would teach them to dance the English way as she sang the words of some of the latest London hits.

What amused them most of all was when Francis dug out an old cassette player, found some workable batteries and started to play old songs which, with the volume turned to maximum, blasted out across the main courtyard. He played Motown and Reggae – Smokey Robinson, Bob Marley and Jimmy Cliff – as well as local jive and, of course, rumba – Leonard Dembo, John Chibadura and Dazakaita Mukumbira and lots of Thomas Mapfumo – songs which Emma mostly knew. This was the sort of music which sets your feet tapping, music which compels you to stand up and draws you in to – simply – dance. Some tunes had clearly been old family favourites. What caused most laughter was when Prosper tossed aside his jacket, hitched up his baggy trousers, moved centre-stage and began to dance. With one hand gripped tightly to the top of his trousers to prevent them from falling down, and with knees alternatively raised, first to the left then to the right he moved to the music – three steps forward, three back then pivoting round around, his stomach protruding out, his hips swaying ‘like a woman’. Emma joined in, they all joined in and danced, moving towards each other, then falling back, hips moving, hands raised, hands clapping, elbows in, elbows out. They laughed and laughed until exhausted they gave up and collapsed on the ground one by one, calling for water to quench their thirst.

This is the sixth in a series of extracts from Tapestries of Difference, a novel  by Roger Riddell. In an exclusive agreement with the author and Powerhouse Publications, The Zimbabwean will be publishing a series of extracts from the book over the next several weeks.  Tapestries of Differences is available in both paperback and kindle form from Amazon UK and Amazon.com. It can also be ordered direct from Blackwell’s bookshop Oxford, UK.