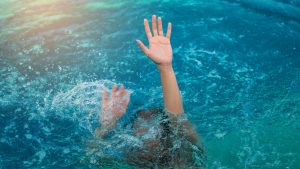 A woman is alone in a narrow rowing boat travelling along a wide fast-flowing river. It could be the upper reaches of the Zambezi close to the Victoria Falls, known locally as the-smoke-that-thunders for its ferocity, and it turns out it is. Suddenly she hears a crunching sound and feels a thud underneath her as the boat grinds to an abrupt halt. She is stuck. The boat has become wedged between rocks just below the surface right in the middle of the river.

The woman screams when the boat hit the rocks, and now screams again as, to her horror, she first hears then sees a man struggling in the river behind her to the left, shouting, one arm desperately waving over his head to try to catch her attention, the other fighting the current as he battles to keep afloat. He is too far away for the woman to be able to grab hold of him, but not too far off to recognise him. It is Simon.

No sooner has the woman taken in that the man in mortal danger is Simon than she hears a second cry for help, this time behind her and to the right of the boat. She turns and sees a second man caught in the fast-flowing river, his arms waving frantically, his head repeatedly bobbing up and down as he also struggles to keep afloat, such is the power of the current. This man is not close enough for the woman to be able to grab hold of him either, though she immediately recognises him. It is Robbie.

The men are not aware of each other but both realise they know the woman as, almost at the same time, she hears the word “Emma” ring out from each of them above the noise of the river and the thunder of the Falls beyond. The men are terrified. They repeat her name as they each plead desperately for her to come to their aid. Emma, Emma, Emma … Emma, they cry out. They know she is the only who can save them. She is their only hope.

Emma’s boat carries a red and white lifebelt ring on board. It is right next to where she is seated, securely bound to one end of a long, lightweight rope. The other end is attached to the front of the boat. Emma jumps up and, as quickly as she can, lifts the lifebelt and tosses it out in front of her downriver in the direction of the Falls with all the force she can muster, propelling it into the air to go as far as the rope will carry it before landing on the water beyond her.

As she releases the ring, Emma sees that the two men have now drawn parallel to her boat, Simon to her left and Robbie to her right, though they are still well beyond her reach. Ahead of her, Emma is acutely aware of how near she is to the Falls. The sound of the water cascading to the rocks below is deafening and she can feel the spray from the mighty Zambezi falling onto her from above like rain. She knows the men are being sucked ever closer to the 100-metre drop and certain death.

At that moment, Emma feels an enormous gush of wind all around her: it is so strong, she has difficulty steadying herself. She suspects it’s some sort of freak whirlwind. The wind catches the lifebelt ring and for a moment is seems to hover almost motionless above the water. Emma can now see both men ahead of her; they are beyond her boat and they have just noticed each other. Indeed, they seem to be signalling to each other. They then both catch sight of the ring hovering above them and each tries to grab it, but it is too far away – to the left of Robbie and to the right of Simon.

When she had tossed the ring out in front of her, Emma had tried to be scrupulously fair, throwing it equidistant between the two men. But as it now wavers momentarily in the air, Emma becomes agitated, fearing she might have thrown it a little to the right, favouring Robbie, or a little to the left, favouring Simon. As it starts to fall, she looks on in terror as the dying whirlwind seems first to tip the ring closer to Simon then, as if changing its mind, sends it veering closer to Robbie. Emma feels pangs of guilt sweep through her. She shouts out loudly, as if to the wind, “I tried to be fair. I didn’t choose who should or would be saved. It wasn’t me, it was the wind which made the lifebelt change direction.” Her clothes are now so damp with spray they cling to her body as she stands motionless in the boat, helpless and distraught.

Then, as suddenly as the wind had come and added to Emma’s frenzy, the men appear to have stopped moving. Although they are still waving their arms about frantically and the water continues to rush past them, they are no longer careering forward to the edge of the Falls. They somehow seem to be stuck in the same spot in the river. Emma screams again; she can’t understand what is happening. Her eyes seem to playing tricks on her – or is it her mind?

As she gazes across to the two men in her life, she cups her hands round her mouth and shouts out as loud as she can with desperation in her voice, “For God’s sake grab hold of the lifebelt. Hurry! It’s tied securely to the boat. Take it and you’ll be saved.”

The men look back at Emma, perplexed, then shout back to her, their voices clearly audible in spite of the thundering noise of the Falls. They call out, using precisely the same words as if they were actors coached to say their lines.

Emma is silent. She’s unable to answer their questions. She knows only one man can be saved. However courageous and strong a swimmer he might be, by the time the man who catches the lifebelt ring struggles to reach the second man, the river will have swept him beyond the reach of the lifebelt’s rope. Emma’s insides are churning, she is tortured by guilt. Did she throw out the ring fairly, or did she twist it slightly as she let it go, directing it more to one side than the other, and favouring one man over the other?

Emma sat up. She was in bed and sweating profusely. She recognised where she was – not in her London flat but still in the convent in Mhondoro. She checked the time: it was just after four in the morning.

This is the fourth in a series of extracts from Tapestries of Difference, a novel by Roger Riddell. In an exclusive agreement with the author and Powerhouse Publications, The Zimbabwean will be publishing a series of extracts from the book over the next several weeks.  Tapestries of Differences is available in both paperback and kindle form from Amazon UK and Amazon.com. It can also be ordered direct from Blackwell’s bookshop Oxford, UK.