The Zimbabwean Treasury’s introduction of a 2%  tax on all electronic transactions has yielded positive results beyond the government’s expectations. This is according to Zimbabwe’s Deputy Reserve Bank Governor Kupukile Mlambo. 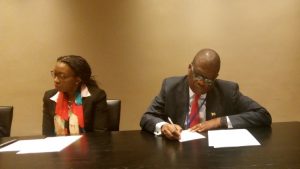 Mlambo noted that the tax collected on electronic transaction managed to pay for the damage of the recent floods in the country.

“Treasury, they introduced a 2% tax on all electronic transactions. This is very important for Zimbabwe because 95% of our domestic transactions are in electronic form so cash really accounts for a very small amount of payments because of the shortage of cash. Now what this 2% tax on electronic transactions has done, – is that it has also managed to bring in the informal sector which normally doesn’t pay taxes.  And for the first time in almost six years we are to have a surplus on our budget. So that is one of the ways we have done and we were able to pay for unforeseen disasters like Cyclone Idai out of that 2%. So it has really worked more than we expected.”