Wages are falling further behind fuel prices, heaping pain on professional drivers and motorists in Zimbabwe.

Harare, Zimbabwe – A kilometre-long queue of some 200 commuter buses winds its way around a block of the central business district in Harare, terminating at the forecourt of a petrol station.

Its 11:42am and an imposing steel gate acts as a barricade between the line of customers with near-empty tanks and the petrol that they need.

“I have been in the queue since 7am,” Blessing Mudzonga, a bus driver, tells Al Jazeera.

“I followed the tanker [a petroleum delivery truck] here and my hunch was right,” he says with a smile.
Other bus drivers, seeing their colleagues waiting patiently, arrive to join the queue.

“Diesel is just so expensive,” Mudzonga tells Al Jazeera. “When we buy at seven Zimdollars per litre ($0.78) and charge two Zimdollars ($0.22) per passenger for an 18-kilometre trip, it means all the money we charge ends up covering fuel costs.”

Fuel has been in short supply in Zimbabwe for almost a year. Beyond tight supply, worsening inflation is adding extra urgency to fill up tanks before prices jump again.

Consumer prices in the economically troubled Southern African nation rose 39.9 percent in June compared with 12.54 percent in May, narrowly missing a return to the dreaded hyperinflationary environment that ravaged Zimbabwe’s economy at the end of the last decade.

Diesel and petrol prices have shot up by as much as 522.37 percent since January as the local currency, the Zimdollar, has weakened against the United States dollar.

Last week alone, Zimbabwean authorities hiked fuel prices by more than 22 percent over the previous week. And that was a tiny jump compared with January, when authorities raised fuel prices 150 percent in a week, triggering violent protests.

“Sometimes we spend a whole day in queues and then we work for a day,” says Mudzonga. “The next day we are looking for fuel again. It’s affecting my job in a big way.”

A currency that can’t keep up

Zimbabwean dollars – or Zimdollars- are the only legal tender in the country since June, when the government outlawed the use of US dollars and other foreign currencies in local transactions.

The government initiated the drastic measure to stem speculative attacks on its domestic currency. But that currency continues to lose value.

At official, interbank exchange market rates, roughly 8.9 Zimdollars buys $1. The black market rates value the Zimdollar even lower, at around 10.5 Zimdollars to $1.

Compounding the pain of a weakening currency are wages, which have failed to keep pace with rising prices.

“The fuel price is very expensive given that our salaries are losing value against the US dollar,” Julius Muteiwa, a driver for a Harara publishing company, told Al Jazeera. “In fact, now it’s beyond the reach of many. Prices are just going up, but salaries remain stagnant.”

Until last October, the Zimdollar was pegged to the US dollar, in effect denominating wages and salaries in US greenbacks. But when the US dollar peg was abandoned, wages weren’t adjusted to compensate for the rapid weakening of the Zimdollar.

The discrepancy is a growing source of pain for Zimbabweans.

“One hundred litres of fuel cost close to 800 Zimdollars against the average (monthly) salary of 600 Zimdollars in this country,” said Muteiwa, “and the price of fuel is going to keep rising as the local currency weakens. If I was earning US dollars, then I would be better off.” 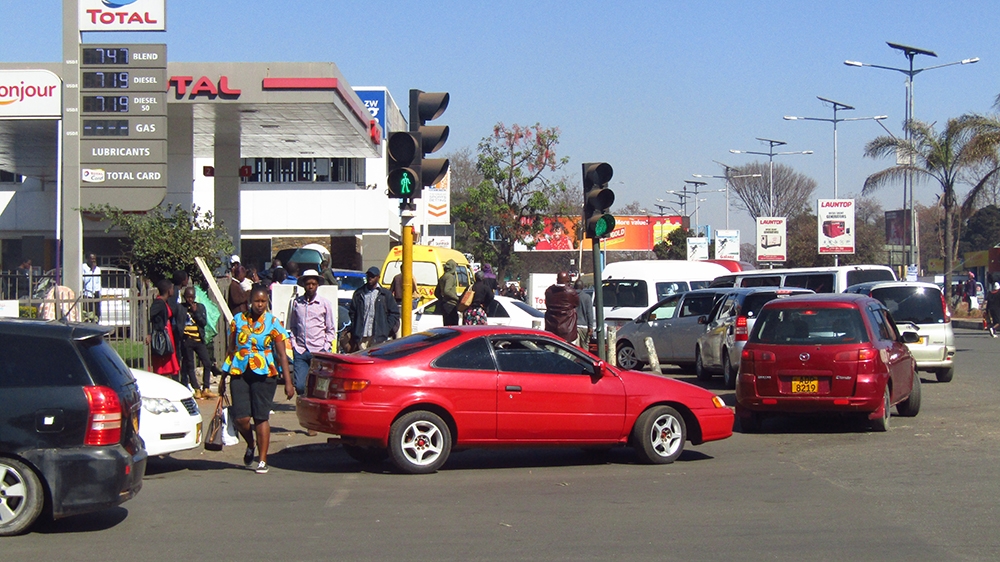 For many motorists in Zimbabwe, wages have not kept pace with rising fuel prices [Chris Muronzi/Al Jazeera]

Despite this latest round of fuel-price increases, at roughly 7.47 Zimdollars a litre ($0.99 at the official exchange rate), petrol has become relatively cheap in Zimbabwe compared with neighbouring countries.

Finance minister Mthuli Ncube last week highlighted the regional discrepancy, saying he wanted to see fuel cost around $1 a litre – which is where it’s currently selling.

For those who have US dollars to spend, rising prices don’t hurt as much – especially for people who trade US dollars on the black market, which literally offers more bank for the buck than the managed, interbank exchange market.

But for Zimbabweans who get paid in Zimdollars – and who don’t have foreign currency to trade – the pain of rising prices could become more severe, say economists.

“When we were still using the US dollars, we were paying $1.43 per litre. In light of that, we should expect the fuel price to rise beyond current prices,” economist John Robertson of Robertson Economics told Al Jazeera. “More price increases are definitely coming.”

Robertson added that fuel prices are just a symptom of a much wider problem the government faces with correctly pricing state-subsidized essential goods.

“Convergence will come when there is a balance of demand and supply,” said Robertson. “I am not sure that is going to happen soon.”

And while the government tries to restore faith in its embattled Zimdollar, Zimbabweans whose livelihoods rise and fall with the price of fuel have a very precarious journey ahead.

“After the increase of this week, I tried to increase the fare for local trips to 20 Zimdollars from 15, but no one is willing to hire the cab at that price,” Edza Munari, a Harare cab driver, told Al Jazeera. “They would rather walk. As such, I have been forced to revert to my old price, and that price doesn’t make sense.”