New Zimbabwe dollar has not solved an essential problem: the lack of hard currency that is needed to pay for vital imports such as food 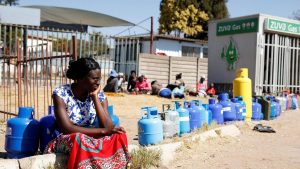 A woman waits to buy gas at a service station in Harare, Zimbabwe, July 16, 2019. Reuters

Zimbabwe is faced with widespread hunger because the country lacks the hard currency needed to import basic food, and a new currency introduced in June has provided little relief.

This week a United Nations spokesman said the situation “was moving from a crisis to an emergency”.

In late June the finance minister Mthuli Ncube said the jumble of foreign money in use since 2009 would be replaced with domestic paper instead. “The British pound, United States dollar, South African rand, Botswana pula and any other foreign currency whatsoever shall no longer be legal tender alongside the Zimbabwe dollar in any transactions in Zimbabwe,” he said in a public statement.

The country had abandoned the Zimbabwe dollar, its currency since 1980 after hyperinflation reached 500 billion per cent by 2008. At the time, the government was desperately trying to print its way out of a financial crisis, churning out money that quickly became valueless as soon as it hit the streets.

Now, a new Zimbabwe dollar is being put out but it has not solved an essential problem: the lack of hard currency such as the US dollar that is needed to pay for vital imports such as food. Consequently, aid agencies warned in July of impending starvation, with up to a third of all households now facing a food crisis, as local suppliers run out of hard currency to pay for imports.

The World Food Program (WFP) says that up to 4.7 million people could be starving by the end of this year.

“Given the scale and scope of the food insecurity in Zimbabwe the WFP is planning to scale up to assist over two million people,” WFP spokesperson Herve Verhoosel said. “Resources must now be mobilised.”

One of the largest food producers, Lobel’s Bakery said at the beginning of July that it would close its bakeries in Bulawayo and Harare indefinitely, cutting production in half. Lobel’s said the closures were unavoidable because local flour mills were unable to supply enough flour to bake bread.

In the cities, fuel queues of up to 2 kilometres are being reported, as supplies of petrol and diesel run short because retailers have limited access to dollars, euros and rands. For motorists the misery of queuing is compounded by thieves who strip parts from drivers’ cars left overnight in fuel lines to make sure they can fill up the next day.

Meanwhile, the government has stopped issuing passports because it does not have the foreign currency to pay for the special inks and paper required for travel documents.

“The passport situation is just the tip of the iceberg,” says Dewa Mavhinga, Southern Africa director with the Africa Division at Human Rights Watch. “The country is in a huge crisis politically and economically. It’s a reflection of the massive mismanagement that is happening now.”

Perhaps most pressing for Mr Mnangagwa and the ZanuPF party he leads is how to compensate civil servants, who have seen the purchasing power of their salaries collapse as the new currency is introduced. The civil service continues to eat most of the country’s $8 billion (Dh29.3bn) national annual budget at a time when inflation is officially running at 176 per cent, the highest in 10 years.

Now government employees, including police and soldiers, have started holding protests to demand their salaries be adjusted upwards. They claim the new currency’s official exchange rate is not matched by its real-world purchasing power.

The Apex Councils for civil servants and health services, the main government employee union, says a starting salary of $500 that its members had previously received, is now worth less than $50 in terms of buying power because they are now paid in Zimbabwe dollars.

“Our situation is untenable,” says David Dzatsunga, Apex council secretary. “We cannot afford to go to work as usual, we cannot pay our children’s school fees, we are failing to meet our health bills – a lot of things we were able to do, we cannot afford to do any longer.”

A worker previously earning $500 should now be paid $5,000 in Zimbabwean dollars to reach the same earnings level as previously, Apex says.

Given the importance of the civil service in helping the ruling party ZanuPF cling to power, cranking up the minting press seems inevitable.

In South Africa, towns are imploding as water proves scarce and infrastructure suffers

Steve Hanke, professor of Applied Economics at Johns Hopkins University in the US and a scholar of Zimbabwe’s economic implosion, said in a tweet that inflation is even higher than the official rate, which will force the government’s hand in reaching a settlement with its employees. “Since making the US dollar illegal, Zimbabwe’s inflation has soared. Today, by my measure, the annual inflation is 546 per cent a year. Zimbabwe will raise civil servant wages, which already eat up most of the budget, in an attempt to maintain living standards in death spiraling Zimbabwe.”

Printing money is something Zimbabwe has experience with. This was the disastrous strategy applied in the early 2000s, when the economy collapsed after ex-president Robert Mugabe began driving white farmers off their land. Agriculture was the main provider of export finance and as the farmers left, state coffers ran dry.

Unable to pay civil servants, whose salaries account for more than 90 per cent of Zimbabwe’s budget, according to Reuters, Mr Mugabe ordered the central bank to simply print money.

The result was catastrophic runaway inflation that saw a trillion dollar note trading against just one greenback. By 2009 the government raised the white flag and scrapped the currency, and made the US dollar, euro and rand legal tender instead.

This did indeed bring rocketing prices to a screeching halt. However, it also introduced a whole new problem: cash liquidity.

Without the authority to print its own money, Zimbabwe has depended on the unreliable inflows of cash from business transactions. Electronic funds in bank accounts could not be turned into cash, because there was not enough to meet demand. Banks began to ration customers, limiting withdrawals to as little as $20 a day, regardless of how much they had in their accounts.

The spread between US dollars in the bank and dollars in hand began to widen, reaching as high as 70 per cent by late last year. “If I have an expense to pay such as school fees, and I need $2,000, it will cost me more if I pay by electronic transfer than if I pay cash,” says Vince Musiwa, an economist based in the capital Harare. “So before I can pay, I have to first spend a few days trying to secure the money in cash, or I might have to pay thousands more.”

Various strategies to provide liquidity were tried, with limited success. “Bond notes”, a pseudo currency, were introduced by the Reserve Bank of Zimbabwe in 2016, with a printed value of Z$2 and technically equal to the US dollar. These were never popular with consumers or businesses and never really caught on.

In February this year, Zimbabwe introduced the real-time gross settlement dollar, or RTGS, in the hopes of weening the public off the greenback. It proved no more popular than its predecessor and quickly began trading at a discount to other currencies.

The country had even considered exclusively adopting the rand, the currency of its neighbour South Africa, and hoped to import cash from Pretoria, the president of Zimbabwe Emmerson Mnangagwa said in June. However, the South African reserve bank had made “unacceptable” demands that could not be met, he added.

“South Africa’s Reserve Bank wanted to know our GDP and other things that we did not agree with. This was because they would have had to print the requite value of currency for circulation in Zimbabwe.”

It was yet another reason for many in Zimbawe to look to the near future with a sense of foreboding.