HARARE, Zimbabwe — Representatives of Zimbabwe’s government workers Tuesday protested against what they called “slave salaries” as inflation almost doubled to 176%, a decade high that highlights the country’s rapidly deteriorating economy. 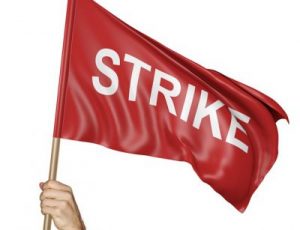 Holding placards and singing songs denouncing the country’s finance minister, about two dozen union leaders representing teachers, nurses and other government workers gathered in front of the finance ministry offices in central Harare. A few police officers monitored the protest from a distance.

Leaders of the civil servants union said government workers would be unable to continue showing up for work if their salaries are not adjusted to match inflation.

“We have become slaves of the government. We just came as the leadership today but we will paralyze government operations if our demands are not taken seriously,” said Cecilia Alexander, leader of the workers’ union.

The inflation rate increased dramatically from 97% in May, according to figures released by the government’s statistics agency Monday.

Civil servants earn an average of 500 Zimbabwe dollars (about U.S. $50), just enough to buy 80 liters (21 gallons) of gasoline. They have rejected a “cushioning allowance” offered by the government that would have given an added 97 Zimbabwe dollars a month to each of the more than 300,000 civil servants.

The government has said it is reviewing the salaries.

Zimbabwe’s economy has been worsening in recent months, with prices of basic items such as cooking oil rising above the means of many while bread, gasoline, electricity and water have become scarce. Inflation accelerated following last month’s decision to re-introduce a Zimbabwean currency as the country’s sole legal tender.

Zimbabwe had not used its own currency since 2009 when the Zimbabwe dollar was abandoned after hyperinflation reached 500 billion percent. Since then the country operated with the U.S. dollar and other foreign currencies until the return to the Zimbabwean currency.

The re-introduction of the Zimbabwe dollar was praised by President Emmerson Mnangagwa as a “return to normalcy.” But for many who lost savings and pensions a decade ago, the move triggered widespread fears of a return to the hyperinflation days.

Hunger is growing in Zimbabwe, with a report on rural food vulnerability released Monday showing that 59 percent of the rural population, representing just over 5.5 million people, is food insecure due to drought and the unaffordability of basic food items.

Some have resorted to selling livestock and land, spending savings, withdrawing children from school and begging, according to the report compiled jointly by the Zimbabwe government, U.N. agencies and aid organizations.