In the first part of this FT Series, we look at how remittances of cash, food and goods comprise nearly 10 per cent of Zimbabwe’s GDP 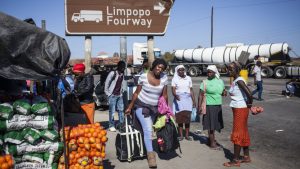 The laden Toyota Hiace minibuses and Isuzu pick-ups that depart from South Africa’s economic hub every day on journeys hundreds of miles north are a vital artery that helps to keep Zimbabwe’s broken economy alive.

As the shortage-plagued nation once ruled by Robert Mugabe has descended deeper into crisis this year, Zimbabwe’s border-crossing omalayitsha — which means transporters in the Ndebele language — have shuttled groceries, clothes and cash from Zimbabweans abroad to families facing inflation of 175 per cent at home. Emmerson Mnangagwa, who succeeded Mr Mugabe as president in a 2017 coup, is attempting to shore up Zimbabwe’s fragile new local currency and rebuild empty state coffers. As he does so, remittances such as those brought into the country via this malayitsha bus system, are a crucial safety net.

They also show why, for countries such as Zimbabwe, remittances of food and goods — known as remittances in kind — can be just as important as wiring money home. There is even a malayitsha app. “There is no food that side — or there is, but it is too expensive,” said Florence Ncube, a 43-year-old cleaner in Johannesburg who sends food home to her family in Bulawayo, Zimbabwe’s second city, which she left a decade ago. “It is better to buy groceries here” and send them home, she said. What are remittances? Money and goods sent by workers and other people living abroad to their families and friends at home. As global migration patterns have intensified over the last couple of decades, remittances have grown to become a significant contribution to some countries’ economies. Ms Ncube typifies Zimbabwe’s diaspora, which is millions strong after decades of turmoil. Most are based in South Africa, doing jobs such as domestic work, but Zimbabweans can be found around the world.

The expats have become a powerful economic force back home, sending remittances that last year were worth at least $1.9bn, or 9.6 per cent of the nation’s GDP, according to the World Bank. Economists estimate that a third of that total came from Zimbabweans in South Africa. Even then these figures are likely to understate flows, since the malayitsha system and other informal channels are difficult to track. A man waits with goods on the side of the road in Johannesburg for pickup by malayitsha, or transporters © AFP Mr Mnangagwa has pledged to make Zimbabwe “open for business” to foreign investors but many were scared off by last year’s botched election and repeated military crackdowns on dissent. As a result the ruling Zanu-PF, which was once hostile to those who voted against it with their feet, is now courting diaspora money.

In a speech in July Mr Mnangagwa asked “brothers and sisters in the diaspora to be good ambassadors of our beautiful country and invest back home”. When the economy does well, [people] are sending building materials. When it’s not doing well, it’s groceries Chipo Dendere, Wellesley College Yet the reality is that many diaspora remittances are like Ms Ncube’s — small amounts, often in kind, that are vital to the daily survival of family members. Among her biggest outgoings is the $35 she sends home to her son for school fees every term. “It’s not savings. It’s going towards school fees, groceries and fuel,” said Chipo Dendere, a Zimbabwean-born political scientist at Wellesley College who studies the links between remittances and Zimbabwe’s economy and politics. “When the economy does well, omalayitsha are sending building materials. When it’s not doing well, it’s groceries,” she said. This system also reflects the high transaction costs of sending money through the formal financial system. Sub-Saharan Africa is the world’s most expensive place to remit money.

According to World Bank data, it cost $18 on average to remit $200 between African countries last year, $4 more than the global mean — and in southern Africa, it cost over $37 on average. Every 100 South African rand ($7) that Ms Ncube sends home to Zimbabwe costs about 20 rand on mobile-money remittance services, she says. Remitters such as Ms Ncube are wary of the new Zimbabwe dollar, which was launched in June when the government withdrew the legal-tender status of foreign money. The new rules made an exception for remittances, which can still be received in foreign currency.

But the money then has to be changed into the Zimbabwe dollar in order to be spent in shops, where prices have soared. There is a wide gap between the official and black-market rates for the new currency, and little trust in it. “That money doesn’t have any value.

You cannot buy anything with that money if they exchange it. Things are too expensive,” Ms Ncube said. There are longer-term pressures on the Zimbabwean remittance economy — including simply that the diaspora is ageing. Read more Best of Lunch with the FT 2018 ‘I’m not a crocodile’: Zimbabwe’s president has Lunch with the FT Professionals who left as the economy began its tailspin in the 2000s are now entering late middle age. Many in the US are obtaining citizenship. Some are choosing to be buried abroad. “People are settling in, or have reunited with nuclear families. There is less money to remit to extended family in Zimbabwe,” Ms Dendere said. Cash trails This FT series looks at how money sent by migrants links disparate countries in unexpected ways. Part one Remittances in kind Still to come . . . Part two The politics Part three Investment Part four Labour shortages Part five After remittances Part six Technology Part seven The global perspective Subscribers can receive alerts when new content is published in this series by following ‘global remittances’ with myFT.

She added that the newest wave of migrants became younger and more desperate as the economy worsened. Many Zimbabwean migrant workers in South Africa and other nearby nations now barely earn enough to survive, let alone to remit. It is stressful to be a distant breadwinner. Behind economic figures on remittances lies “the strain on relationships, the pressure on those sending” cash each month, Ms Dendere said. “Western Union babies” and “WhatsApp parents” have become part of Zimbabwean family life. “It is too difficult,” Ms Ncube said, emotion rising in her voice. “People are starving at home.”