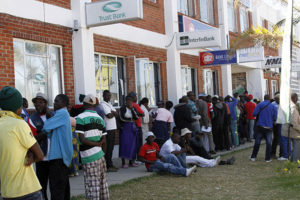 The Bankers Association of Zimbabwe, which represents the nation’s 21 lenders, “would defend the action,” the organization’s legal representatives said in the court documents, filed last week. The association had been served with a summons on July 24 giving them 10 days to respond to claims from Cambria’s Paynet and Payserv units in Zimbabwe.

The battle between London-based Cambria and the association reached boiling point in June when Paynet, one of the country’s largest providers of bulk payments such as salaries, suspended services to banks, citing unpaid bills. It forced the lenders to switch to smaller providers or resort to manually managing payments, hindering the flow of money in the cash-starved $31 billion economy, already grappling with rampant inflation and mass unemployment.

Cambria on Tuesday said banks had closed their Paynet gateway, preventing compliant lenders from transacting with them and hindering the orderly flow of payments. The company is betting a partnership with Ecocash, the mobile-money unit of Econet Wireless Ltd., will help it recover some of the lost revenue from the dispute with the banks.

“If not successful, Cambria will need to significantly downsize its operations in Zimbabwe, as it continues to pursue legal recourse through the courts of Zimbabwe,” the company said, adding it may also approach courts in neighboring South Africa, or the U.K..