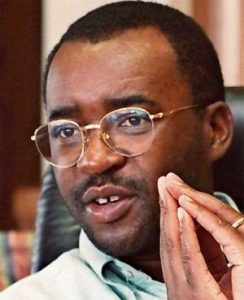 “We regret to announce the discontinuation of Kwese TV Satellite Service with effect from August 5,” Mboweni said in a statement Sunday. The service was offered by Econet Media, an affiliated company.

“The third party content providers on whose content we rely, require payment in foreign currency,” he added. “With the prevailing economic conditions in Zimbabwe, and the current business operating environment – characterised by an acute shortage of foreign currency – sustaining Kwese and Kwese Satellite Service was no longer viable.”

Econet Media operates in more than a dozen countries under the Kwese brand and is owned by Zimbabwe’s richest man, Strive Masiyiwa.

Last month the company went into voluntary administration and appointed accountants Ernst & Young to manage the process as it pays its creditors.

Zimbabwe stopped recognizing the US dollar, South African rand and other foreign currencies as legal tender in June as it tries to curb black-market trading that’s contributed to surging inflation.

The country’s finance minister last week responded to the worsening economic crisis by blacking out inflation statistics for the next six months.

–With assistance from Loni Prinsloo.