Mobile money is not showing up at the crisis facing Zimbabwe. 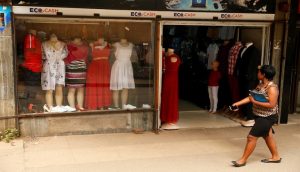 The country, which according to the IMF has the second-largest informal economy in the world behind only Bolivia, seems like an ideal test-bed for mobile money. In the fourth quarter of 2018, mobile money was used for 85% of all retail transactions in Zimbabwe. EcoCash, a subsidiary of EcoNet Wireless, the country’s leading mobile phone operator, is the dominant provider.

The growth of EcoCash was driven by its ability to extend financial inclusion by drawing in previously unbanked customers.

But recurrent power blackouts and food shortages in the context of a currency crisis are now showing the fragility of that model.

During blackouts, mobile operators need to resort to backup power generators, which makes their services much more expensive to provide. High transaction fees and a government tax all increase the difficulties facing users.

According to the Famine Early Warning Systems Network (FEWS) in August, food supplies across Zimbabwe are now significantly below average, especially for maize grain. Mobile money is doing little to improve access to food, with mobile money prices up to 40% higher than cash prices.

And mobile money is worsening rather than improving matters: “the high and increasing service charges imposed by retailers, traders, and service providers is further eroding household purchasing power.”

John BaRoss is the founder of Finnclude, a non-profit grouping of financial services professionals which aims to promote financial inclusion. He says that EcoCash’s woes show that it’s “premature to push any population” into going totally cashless due to the ongoing risk of power interruptions.

For fintech to realise its potential in Africa, policymakers need to first fill the “large existing hard infrastructure gap”, Amadou Sy, senior fellow at the Brookings Institution, writes in a paper in May.

Bottom Line: Mobile money is of little use in a crisis unless sustained infrastructure investment has prepared the way.