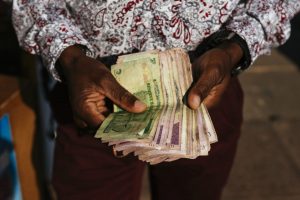 On Monday, black market rates for the Zimbabwe dollar ranged from 14.7 to 15 to the U.S. dollar, according to Marketwatch.co.zw., a site run by financial analysts. The official rate was at a record low of 14.91, according to the Reserve Bank of Zimbabwe. The central bank said on Sept. 21 that bureau de change rates would need to be within 7% of the official rate after they slumped to as low as 23 to the U.S. dollar.

As recently as February the official rate was pegged at parity with the U.S. dollar. With a worsening food crisis and insufficient funds to pay for wheat and fuel imports, the currency had collapsed in line with the economy. While the release of annual inflation figures has been suspended until next year, analysts estimate the rate to be as high as 918%.

The central bank also froze the accounts of the country’s largest fuel supplier and car dealer, both of which have strong links to the government. No reasons for the decision were given by the authorities.

“We took some action,” said President Emmerson Mnangagwa, according to the state-controlled Herald newspaper. “We have now arrested the galloping rate which was galloping from about eight, within a few days it had gone up by 10 and 20.”