Widow Grace Mugabe wears a black veil as she follows the casket of former president Robert Mugabe to an air force helicopter for transport to a stadium where it will lie in state, at his official residence in the capital Harare, Zimbabwe Thursday, Sept. 12, 2019. Controversy over where and when Robert Mugabe will be buried has overshadowed arrangements for Zimbabweans to pay their respects to the deceased leader. (Ben Curtis/Associated Press) 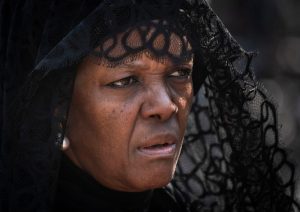