It is not all plain sailing for President Mokgweetsi Masisi who was re-elected as the party president to lead the Botswana Democratic Party into elections on 23 October. 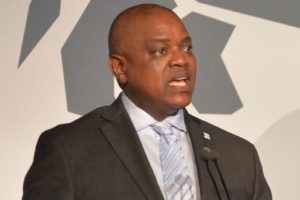 For the past eighteen months, having stepped out of the shadow of his predecessor Ian Khama, he has been determined to forge his own path, dedicating himself to ridding Botswana’s public service of the corruption it became tainted with under Khama’s presidency.

In spite of the fact, he is mindful that it was Khama himself who, having served the maximum number of terms as laid down in Botswana’s Constitution, put him forward for the top job. When Masisi became President he felt he earned the right to govern the country as he saw fit according to the highest standards of democracy.

The trouble between them started when President Masisi made it clear to Khama that it was not ‘business as usual’.  He made it known that he was his own man, and while he revered the traditional values of democracy espoused by Khama’s father and founder of the BDP, Sir Seretse Khama who became the first President of Botswana, it was time to carry Botswana forward into the 21st century and work to unblur the lines of independence of the administration, Parliament and the judiciary.

As Khama’s Vice President, Masisi did his job as his subordinate and obediently carried out his orders.

But once he became President, Masisi felt that the time had come to govern the country according to his conscience and try to rectify certain elements that he felt were threatening Botswana’s democracy. And Ian Khama did not like it one little bit. He was particularly upset when Masisi would not appoint his brother Tshekedi as his VP.

But perhaps the straw for Khama that broke the Masisi/Khama relationship came in January this year when Masisi arrested Khama’s key ally and former intelligence boss, Isaac Kgosi who was charged with various charges relating to corrupt practices and obstruction of justice.

Then in May this hear, Khama resigned from the BDP, the party his father founded and announced his support for the Botswana Patriotic Front (BPF). He publicly called Masisi a traitor.

President Masisi responded in a recent media interview saying: “Promises were made and assurances were given that once he (Khama) vacated office, he would always support the government and that he will never destabilise the government. But now he appears to have done a total somersault”. At the beginning of September, Khama was out campaigning for his new party.

President Masisi’s other challenge is that the BDP has been in power since independence in 1966, although not always with a Khama at the helm. Khama is doing everything to make the Bangwato, which inhabit Central District, Botswana’s most densely populated and BDP stronghold, switch their allegiance to the BPF. But it is likely the Bangwato will remain loyal to the BDP.

Under Masisi and a BDP government, Botswana could experience a rebirth.  The BDP has pledged in its manifesto to make some landmark changes to Botswana’s Constitution which as it stands, decrees that all Batswana are equal, but all ethnic groups are not. It refers to minor tribes and major tribes. This is the type of thing that the party says will be rectified under his Presidency if he gets the nod from the electorate.

The manifesto seems to be a visionary one. Central to all sections of it is the BDP’s national broadband roll out to every corner of the country, to drive development, entrepreneurship, health and education among other things.  It is ironic that UK Prime Minister Boris Johnson is also promising the same in his country so that his entire country has fast connectivity.

The other parties contesting the election, the Umbrella for Democratic Change, headed by Duma Boko, the Botswana Patriotic Front, headed by Biggie Butale but backed by Ian Khama and his brother Tshekedi (TK), and Alliance of Progressives headed by Ndaba Goalathe, all make promises to transform and grow the economy. The four as people are all, not unsurprisingly, dissimilar. They are sophisticated, educated and driven. And their political careers were forged in the BDP. But of the four, Masisi perhaps has the best hands-on experience and record in actually governing Botswana.

A major and most important change he is proposing is a radical reform to the Land Tenure system which for 95% of Batswana is land use only.  So if the BDP wins the election and President Masisi is elected, Batswana will finally be able to become landowners and homeowners and use their property as security to unlock finance to invest in businesses, which they can run from their homes if they so wish.

A free, self-regulating media is also at the top of his agenda.

But before this happens, he has to win the election on 23 October having persuaded the electorate that a BDP renaissance is underway and will take them safely to a prosperous future.

In many ways, Botswana could be the dream investment destination in Africa. It has lots of space, is the least corrupt country on the continent, and is primed for public/private partnership.

But currently, in more ways than one, Ian Khama is the elephant in the room.  He has has also attacked President Masisi for changing the prescription on shooting elephants.

The truth is that Masisi does not like the idea of shooting elephants anymore than the next person, but the difference between him and Ian Khama is that he believes that Batswana have rights over elephants. People come first and if there are elephants continuously destroying crops and livelihoods or even human lives, action must be able to be taken.

Masisi is not advocating the wholesale slaughter of elephants, he loves the environment and recognises the attraction they are to tourists. But the subject is certainly an emotive one. At the end of May while speaking at a De Beers group function he was accosted by a woman screaming at him about his decision to allow elephants to be shot. Masisi stopped security from removing her and calmly explained the dilemma of increasing numbers of elephant presented to Botswana and its people, many of which are subsistence farmers.

Masisi said Batswana are law-abiding and after consulting with affected communities, the government resolved to help by allocating areas for tourism that would provide revenue for the communities but in areas where it was not possible, elephants that proved to be dangerous and a persistent nuisance to Batswana would be shot. He stood firm on his belief that people should come first.

He explained that Botswana had an enviable record when it came to the management of its elephant population, which is also the largest wild herd in the world, but this took its toll on the environment and other species like the Chobe Bushbuck which is now virtually extinct due to habitat loss. Something clearly needed to be done. He would be happy for elephants to stop off in Botswana on their annual migration route, but decades of conflict in surrounding countries resulted in the wise elephants settling in Botswana where they felt safe.

He also discussed the formation of The Kavango Zambezi Transfrontier Conservation Area which brings together the countries of Angola, Botswana, Namibia, Zambia and Zimbabwe to form the world’s biggest conservation area. This could eventually cover more than 440,000 km2 which would hopefully allow elephants to resume their ancient migration routes and alleviate the problem of them solely congregating in Botswana. But this is a long term project.

In the meantime, there will be limited hunting of elephants with any revenue going to the affected communities.

With finesse, Masisi had defused what could have been an ugly international incident into an elegant opportunity to state Botswana’s case.

But for Masisi, this election is not about elephants, it is about charting the course of Botswana into the future. Botswana is already the poster child of Africa. Transparency International rates it as the least corrupt country in Africa. Over the last decade, it has averaged a 5% growth in GDP and its unemployment rate is just over 16%. When compared to Zimbabwe at up to 90% and South Africa at a possible 29%, (depending on who you believe), this is negligible to some but alarming to Masisi and his leadership.

If a Masisi-BDP-Government gets the nod from the electorate, he has said he will ensure that Botswana becomes the most investment-friendly destination in Africa by cutting red-tape to a minimum and offering a 15% corporate tax rate with the exception of special economic zones, like Selibwe Phikwe which will offer an incentive of 5%.

Under Masisi’s leadership, Botswana could well be on its way to becoming the jewel of Africa.