The new regional route will take business and leisure customers straight to the industrial hub of Zimbabwe. 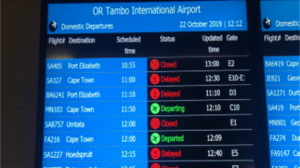 Many African cities like Luanda and Dar es Salaam are experiencing a population boom, growing exponentially. But these cities also have beautiful attractions worth visiting.

As SA Express (SAX) continues to accelerate the phased-in restoration of its network, the airline proudly announced recently that it will commence flights from Johannesburg to Bulawayo effective 18 November 2019.

SA Express will operate daily flights between Johannesburg and Bulawayo with a daily frequency from Monday to Saturday and a double daily frequency on Fridays. This new route reinforces the airline’s already expansive network presence on the continent, while offering the most convenient connections to business and leisure customers.

Bulawayo is the developing, industrial hub of Zimbabwe and the airline is confident that this route is poised for further growth through the stimulation of frequency.  It is also the gateway to Matobo National Park, home to the Matobo Hills rock formations with Stone Age rock art. Here you’ll also be spoilt for choice in terms of wildlife.

SA Express Interim CEO, Siza Mzimela says, “We remain focused on growing and optimising our route network – especially within the region. The new routes offer customers the convenience of a growing network that is positioned to complement our enhanced flight schedule.”

SA Express currently operates to 11 destinations – with the addition of this new regional route, air travel on the continent is made even easier for customers.

• SA 1784: 16h20 from Bulawayo landing at 18h00 in Johannesburg on Fridays – Mondays The second frequency on Fridays will depart as follows: