Receding water levels at Kariba Dam have meant the two countries that generate electricity from it have to look elsewhere for power supplies. But if climate change has its way, the two countries might lose another key economic contributor and major tourist attraction - Victoria Falls. 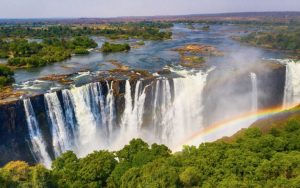 Zimbabwe and Zambia both generate most of their power from Kariba Dam on the Zambezi River, which is on the border between the two countries.

The Kariba Dam has towered over one of Africa’s mightiest rivers for 60 years, forming the world’s largest reservoir and providing reliable electricity to the two countries.

But as drought grips the region, flow on the Zambezi river has dwindled to a third of what it was a year ago, limiting power generation.

While both countries have looked to South Africa’s Eskom as well as the Southern African Power Pool for help, another disaster is looming.

The Victoria Falls also found along the mighty Zambezi River, and a major tourism drawcard for both countries is running dry – threatening millions of dollars generated from tourist visits.

At the height of the rainy season, more than five hundred million cubic meters of water per minute plummet over the edge of the falls into a gorge over one hundred meters below.

But without much water, as is the case now, the falls become just another gorge.

Using his twitter handle  the statesman bemoaned the impact of climate change on the falls. Attaching pictures showing large sections of the world-famous waterfall completely dried up, he tweeted: “These pictures of the Victoria Falls are a stark reminder of what climate change is doing to our environment and our livelihood.

“[There is] no doubt that developing countries like Zambia are the most impacted by climate change and the least able to afford its consequences.”

He added that now is not the time to play “politics with climate change”. “We must come together and provide solutions around mitigation and adaptation.”

He quoted Republican Political Consultant Whit Ayres: “Denying the basic existence of climate change is no longer a credible position.”

Climate change has been found to be the biggest cause of extreme events such as drought and floods, according to the UN expert panel on climate change.

And if indeed the Victoria Falls continue to suffer, it will be a heavy blow. Holidaymakers have long made the journey to see Victoria Falls in its full glory and majesty: the mist, the rainbow and the thunder.

So any disruption caused by climate change on water discharge at the waterfall will be most damaging to the tourism industry in particular, and the two countries’ economies in general.