Scientists and animal rights activists believe that Zimbabwe has been pushing to get transfers in before the ban; they fear that the opaque trade could now move underground. 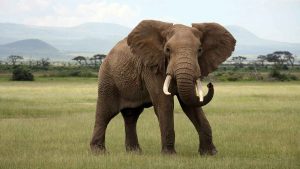 Hwange National Park, Zimbabwe (CNN)The cellphone footage reveals rows of steel cells stretching along a concrete floor. Behind each set of bars, a juvenile African elephant, their tusks just barely showing. One elephant presses its head into the corner of its prison-like confinement.

Zimbabwean officials legally captured these highly intelligent and social animals in Hwange National Park. Now, they will be broken and put on display for tourists in China.
By the end of this month, as more and more experts weigh in on the deep trauma suffered by captured elephants, a treaty governing international animal trade will halt the export of live elephants from Zimbabwe and other countries in Southern Africa.
Activists say they fear that the opaque trade could now move underground. 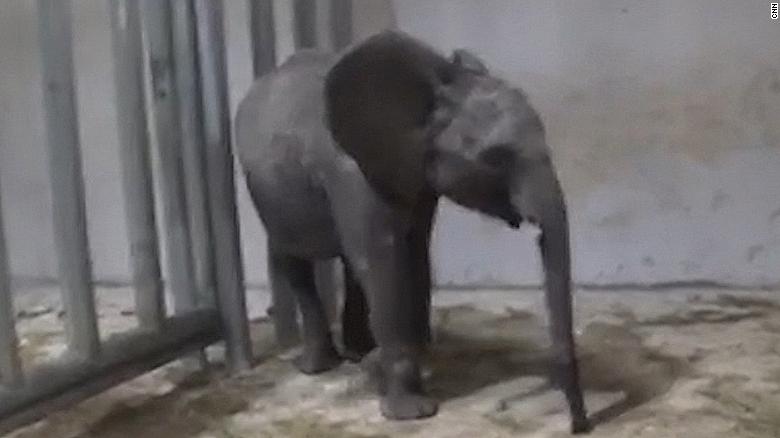 A screenshot taken from cellphone footage shows a caged young elephant in China.

Stuck in a holding pen

A vast park on Zimbabwe’s westernmost frontier, Hwange is one of the continent’s best spots for seeing giant elephant herds.
But few of the tourists entering the main gate are aware that just a few miles away to the southeast is a large boma compound, notorious among animal rights groups as the center of Zimbabwe’s efforts to sell elephants.
Armed with satellite coordinates provided by a source, we drove to the edge of the compound to try and see the elephants allegedly still inside.
“I have no idea about that,” a manager says, when asked about the elephant boma, a kind of holding pen before translocation.
We were quickly asked to leave, but Chrispen Chikadaya, a senior inspector with the Zimbabwe National Society for the Prevention of Cruelty to Animals (ZNSPCA), is one of the few people who has gotten inside.
Chikadaya began hearing the rumors late last year that park authorities were rounding up breeding herds and capturing juveniles for export.
Witnesses told him that wranglers were grabbing elephants old enough to survive without their mother’s milk, but small enough to squeeze into a freight box to China.
“They experience severe stress; they don’t have the freedom they have to move around like they do in the wild. If you put them in cages, you have now taken away the wild in them,” says Chikadaya.
Footage courtesy of Humane Society International released earlier this year.
Video released by Humane Society International shows the young mammals pacing back and forth, behavior often exhibited by stressed elephants. Predictably, the images sparked outrage.
“This is fiction. People act like we don’t love these animals, that we are abusing them. It is not true, because we are looking after our animals very well,” says Tinashe Farawo, a spokesman for Zimbabwe National Parks and Wildlife Management Authority (Zimparks).
He says that Zimbabwe has legally translocated animals to zoos, circuses and sanctuaries for decades without much fuss.
“We have moved animals to the US, the UK, Australia and New Zealand. This is not a new phenomenon in this country,” he says. “We think people should be scientific and ask what the facts are, not the emotions.”

Well-known elephant biologist Joyce Poole scoffs at the emotion-versus-science argument.
After studying elephants in the field for decades, she believes that they are uniquely intelligent and ill-suited for confinement.
“Some critics say we are ascribing human characteristics towards elephant, but we are not. These are elephant characteristics. They are capable of empathy, of self-awareness, understanding death and compassion. This is the kind of scientific evidence that Zimbabwe is ignoring,” Poole says.
She says, like us, elephants are highly social animals — confine them and they get bored, depressed, aggressive and sick.
“Through the course of evolution, they have developed these really close social bonds. If you take that away from an elephant, you destroy it,” says Poole.
On average, elephants die much younger in captivity, are less fertile, and suffer more from ailments like arthritis.
“Some animals are suitable and may even prosper in captive situations and zoos, because their biological needs are met. As for elephants, the needs are so beyond the scale of any zoo I have seen, that none of them are appropriate or suitable as a destination,” says Keith Lindsay, an elephant biologist who has studied zoo conditions.
As scientists learn more about elephants, public attitudes and policy have begun to change. In the US, the Ringling Bros. and Barnum & Bailey circuses stopped using elephants in 2016 — a year before the company shut its doors for good.

In June, President Emmerson Mnangagwa said the country needed to sell wild elephants to fund its conservation efforts.
Back in May, the government revealed it had made $2.7 million from the sale of 90 elephants to Dubai and China.
In recent years, Zimbabwe has found ready buyers in China for their live elephant trade, but the ZNSPCA says the details of those deals and the conditions of the confined animals have been deliberately obscured.
Chikadaya says when he first inspected the elephants, in Hwange, slated for export back in 2018, inspectors were told by park officials that the elephants would be moved within a month, but they were kept in a boma for nearly a year.
In October, word got out that officials were preparing to ship the elephants, and the ZNSPCA team rushed back to Hwange. After the seven-hour drive, they were forcibly barred from the boma, despite their legal mandate to inspect captive animals. Zimpark officials say that they didn’t have the right paperwork, but their inspectors are, in fact, free to inspect whenever they want.
The ZNSPCA says that the following morning the elephants were crammed into crates and spirited out of the park as their inspection team slept.
“It all should be transparent,” says Chikadaya. “We should know that our animals are being translocated. And we need to know what benefit it has for conservation.”
Zimparks did eventually release basic information on where the elephants went and what they bought with the money — their spokesman says there is no issue of transparency, adding they bought everything from vehicles to uniforms with the proceeds.

A vast park without resources

With about a third of Zimbabweans surviving on food aid during the lean season, many would view the fate of about 30 elephants the equivalent of “first world problems.”
Ultimately, Hwange is expected to pay for itself. They do that with tourist dollars and, says Farawo, by selling elephants.
“We believe that elephants must pay for their upkeep. They must also pay for their protection,” he says, adding that Hwange has elephants to spare, with somewhere between 45,000 to 53,000 in the park — far more than the park’s environment can sustain.
Patrick Sibanda, a veteran ranger of the park, says each year the rains are coming later and later.
He says that around 200 elephants have died from thirst and hunger since October alone. 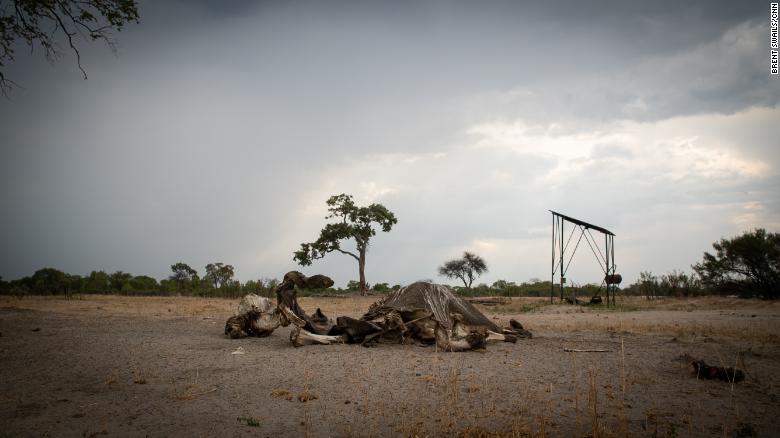 An elephant carcass in Hwange. A severe drought that has drained water sources in Zimbabwe’s largest national park, resulting in a number of elephant deaths.
“It’s very bad. So many elephants have died this year,” says Sibanda, as he walks towards a carcass near a water hole.
“This young elephant came to drink, but I think it was exhausted,” he says. The elephant injured itself at the water trough, he says, and a pride of lions attacked it. On the other side of a dirt track, another elephant carcass lies under an acacia tree
The drought is one of the main arguments put forward for selling elephants to China by Zimparks. They say they need money to repair artificial water holes to save elephants.
“There is no water, there is no habitat, there is climate change. These things are real,” says Farawo
Biologists like Poole say they should instead gradually reduce elephant numbers by reducing the water points, not unnaturally prop up the numbers. But she concedes that there aren’t any easy options for Zimbabwe.

The end of the trade

In the next few days, Zimbabwe will no longer be allowed to sell its elephant to China or anywhere else where African elephants don’t naturally exist.
The decision was taken at a Convention on International Trade in Endangered Species of Wild Fauna and Flora (CITES) meeting in Geneva earlier this year, backed by a coalition of African nations and the European Union. Members of the international treaty governing the international sale of animal products approved the ban.
The move was lauded by conservation activists, but slammed in Zimbabwe, where they say they will lose a key revenue stream. Zimparks says they will abide by the treaty for now, but Zimbabwe’s President has already hinted in state media that they could withdraw from the agreement. Activists, meanwhile, worry that the sales will just move underground.
After the elephants left for China in October, there were rumors that several were left behind, too big to fit in the crates after the extended confinement.
Zimparks flatly denied that any were left in the boma.

But after winning a court battle, the ZNSPCA gained access just a few days ago. They found two emaciated young elephants struggling inside the translocation compound.
Chikadaya understands that the parks desperately need funds but says there has to be another way. He says the lack of transparency from the government and the trauma faced by the elephants, both here in Zimbabwe and thousands of miles away in zoos across the world, just can’t be worth it.
“Our wildlife belongs to Zimbabweans. It doesn’t belong to one person; it doesn’t belong to an organization. It belongs to our ancestors. It belongs to our children, to our parents, to our grandchildren,” he says.
Post published in: Business