HARARE (Xinhua) -- The Reserve Bank of Zimbabwe (RBZ) and the Zimbabwe Anti-Corruption Commission are investigating the flooding of new bank notes on the black market while the bank clients are still to access them. 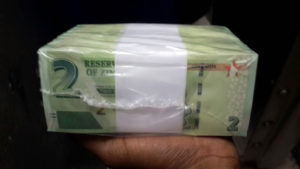 RBZ on Monday released new notes in denominations of 2 and 5 Zimbabwe dollars to ease cash shortages in the economy and the banking public began accessing them on Tuesday, albeit in small quantities as banks limited transactions to between 40 and 100 Zimbabwe dollars.

However, pictures of stashes of the new notes taken outside the banks have been circulating on social media, prompting the RBZ and other interested stakeholders to take action.

The Ministry of Information, Publicity and Broadcasting Services said on Twitter on Thursday that the government, through the RBZ, was investigating the matter.

“Government through the Reserve Bank of Zimbabwe is investigating allegations of abuse of newly released bank note.

“Cash was collected by banks using their CIT (cash-in-transit) vehicles on Monday. All serial numbers were recorded in the register. The offending banks will be named and severe action taken,” the ministry said.