HARARE (Reuters) - Zimbabwe will vigorously enforce a policy to force companies to develop their mining assets and not keep the land for speculative purposes, mines minister Winston Chitando said on Wednesday. 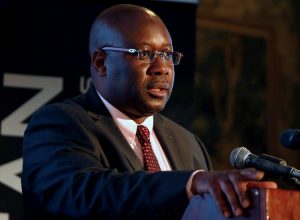 Chitando said some investors had not developed gold and platinum assets that they had held dating back to the 1960s and the mines ministry had asked some companies to justify why they should keep their claims to those assets.

“This is to prohibit the holding of mining title for speculative purposes. We will deal with that more vigorously,” Chitando told a meeting of the mining industry in Harare.

Chitando said the government had been lax in enforcing the “use it or lose it” policy but that would change as authorities pin their hopes on the sector to drive the recovery of an economy grappling with power cuts and acute shortages of U.S. dollars and fuel.

Miners have raised concerns over power cuts that have affected production and want to be allowed to keep all their foreign currency earnings because they are disadvantaged by having a proportion paid to them in Zimbabwe dollars.

But that request was shot down by central bank governor John Mangudya who told the meeting the miners could not keep all their earnings in forex because the government needed some of the money to fund crucial imports like fuel, power and medicines.

Mining companies are only allowed to keep up to 55% of their foreign exchange sales and the central bank pays them in local currency ZWL= for the balance at the official interbank rate.

Zimbabwe is home to the second largest known platinum reserves and large lithium, gold and diamond deposits, but many investors fret over whether they can take money out.