HARARE (IPS) – Stung by the country’s spiralling inflation, Zimbabwe’s government workers took to the streets this week for the first ever police-sectioned march demanding improved wages. They asked the Minister of Finance Mthuli Ncube “to commit to a process of restoring the value of workers’ salaries to the pre-October 2018 status of $475 for 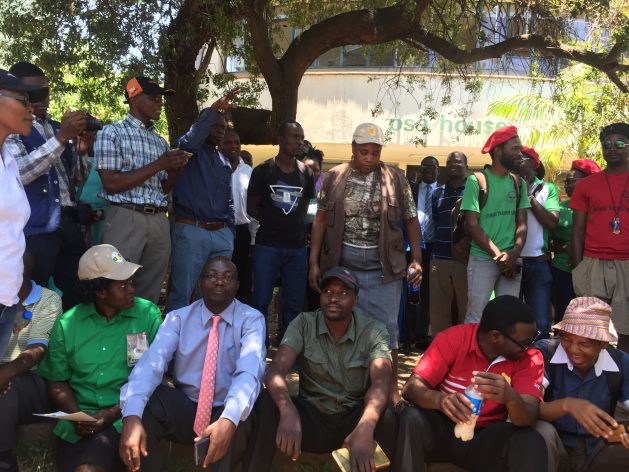 Stung by inflation as wages fizzle under the country’s skyrocketing inflation, Zimbabwe’s civil servants recently staged a strike demanding better wages although police barred the government workers from marching to the country’s Minister of Finance’s office to deliver a petition detailing their grievances. Credit: Jeffrey Moyo/IPS

HARARE (IPS) – Stung by the country’s spiralling inflation, Zimbabwe’s government workers took to the streets this week for the first ever police-sectioned march demanding improved wages.

They asked the Minister of Finance Mthuli Ncube “to commit to a process of restoring the value of workers’ salaries to the pre-October 2018 status of $475 for the lowest-paid worker”.  Currently some teachers earn about $50 a month.

Amid a heavy police presence, the protestors were barred from marching to Ncube’s offices where they intended to deliver their petition.

The recommendations by the IMF would make it difficult for government to accede to the wage increase demands.

But trade unionists like Zivaishe Zhou, who is the National Coordinator of the Zimbabwe Agricultural Professionals and Technical Association, said that inflation was impacting citizens and said that corruption was responsible for the country’s economic demise.

“In Zimbabwe, surely nothing has been damaged by the sanctions, which are aimed at few companies and individuals; we have a corrupt government that is not accountable to anyone,” Zhou told IPS.

The call to lift sanctions

Zimbabwe responded by threatening the U.S. ambassador in the country with unspecified action, with Foreign Affairs Minister Sibusiso Moyo saying “we have the means to bring all this to an end, should we deem it necessary or should we be pushed too far”.

Mnangagwa’s government has pinned the blame on the Zimbabwe Democracy and Economic Recovery Act (ZIDERA), passed in 2001 by the U.S. Senate, prohibiting Zimbabwean entities from doing business with the first world nation.

“ZIDERA has blocked Zimbabwe’s access to international credit markets, leading to the drying up of traditional sources of external finance,” Mnangagwa told a gathering of anti-sanction marchers last month.

But are sanctions to blame for Zimbabwe’s economy?

For Owen Dhliwayo, a Zimbabwean civil society activist here, “corruption in the Zanu-PF government has been prevalent even before the enactment of ZIDERA”.

Experts like Mlondolozi Ndlovhu, who holds a Master’s Degree in Society and Media Studies from the country’s Midlands State University, agree.

“The amounts that have been reported to have been stolen by government officials here even as reported by State media, shows that even with sanctions upon it for as long as there won’t be corruption, Zimbabwe can still manage to do very well in terms of its economy,” Ndlovhu told IPS.

Reacting to the clear diplomatic standoff between the U.S. and Zimbabwe, Ndlovhu also said “a small country like Zimbabwe threatening a country like the U.S., which has the potential to bring investment into the country, only shows that the Zimbabwean government has failed to reform itself”.

“If sanctions are ineffective to the extent that the U.S. ambassador believes so, why has America kept them for nearly two decades now?” Mugwadi told IPS.

“The reason why westerners imposed sanctions on Zimbabwe was to cripple our economy,” Kandishaya told IPS.

Civil society activists like Catherine Mkwapati, director of the Youth Dialogue Action Network, a democracy lobby group in Zimbabwe, believe these rights abuses are not resultant of sanctions.