Could joining the Common Monetary Area rand zone be the most promising option? By Keith Jefferis for ISS TODAY 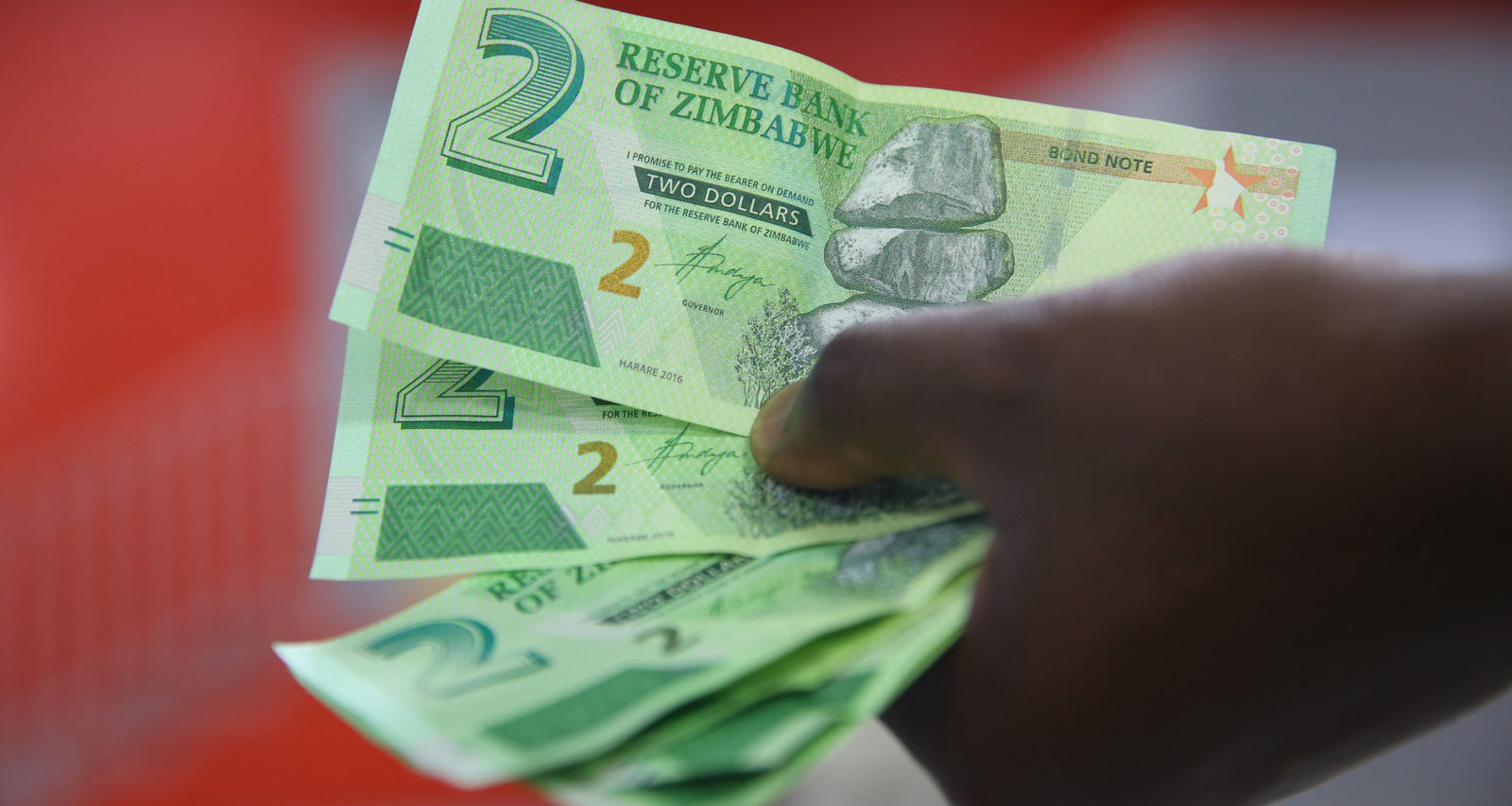 A man holds Zimbabwe bond notes in Harare, Zimbabwe, 09 September 2018. The newly appointed minister of Finance and Economic Development, Professor Mthuli Ncube, in an interview with the local weekly Sunday Mail, was quoted as saying that the current currency approach was not working in that way that the country adopted the US dollar and removed the bond notes in circulation through a demonetisation process. EPA-EFE/AARON UFUMELI

Zimbabweans are heading into yet another bleak festive season, with basic commodity costs soaring beyond the reach of many, and basic service delivery on the brink of collapse. The health system is barely holding, with junior doctors on three-month industrial action and teachers threatening to follow suit.

Civil servants are demanding salaries pegged at the formal US dollar exchange rate known as the interbank rate. There is a real risk of basic commodities running out, and fuel queues continue unabated. There seems to be no real solution in sight. To address the myriad social and economic woes, the currency crisis must be addressed urgently.

This year has seen many twists and turns in Zimbabwe’s long-running currency saga. In February, the electronic real-time gross settlement (RTGS) dollar was officially adopted as a local currency, alongside bond notes and multiple foreign currencies. In June, the use of the US dollar and other foreign currencies was outlawed for most transactions, while in October, Zimbabwe dollar notes were reintroduced.

In the process, the value of the local currency has plummeted. Originally the RTGS dollar was simply a US dollar held in a bank account. Over time the fiction that the “bank” dollar was worth US$1 could not be maintained, as banks lacked the US dollar reserves needed for convertibility.

The value of this bank (or mobile money) dollars has continued to drop, from an official rate of 2.5 per US dollar back in February to around 16 in the interbank market and 25 in the parallel market in early December. In the process, inflation has sky-rocketed and incomes have been slashed.

Zimbabwe’s currency crisis has been long-running. It goes back to the fixed exchange rate days and shortages of foreign currency since independence, to the rapid depreciation and re-denominations of the currency during the 2000s, culminating in hyperinflation and the eventual formal “dollarisation” of the economy in 2009.

Zimbabwe isn’t alone in its currency instability; many countries have been through periods of high inflation, weak domestic currencies and shortages of foreign currency. The root causes are always similar: a combination of bad macroeconomic policies, fiscal and balance of payments deficits, and excessive monetary expansion.

A more typical experience is that as confidence in the domestic currency declines (due to high inflation), citizens and firms switch to holding their bank deposits and making transactions in a foreign currency, usually US dollars. This “partial dollarisation” involves the coexistence of the domestic currency and US dollars in the financial system. Some countries have managed to recover from this, and re-establish a credible domestic currency.

Some countries have introduced new currencies – Botswana in 1976, and the Czech and Slovak republics after the break-up of Czechoslovakia in 1993 – but the success of these efforts rested on the credibility of these countries’ (new) central banks and macroeconomic policies. These factors are not present in the case of Zimbabwe.

Zimbabwe is trying to introduce a new currency with a two-decade history of economic and currency crisis, and a central bank that lost much of its credibility during the era of hyperinflation.

Based on international experience, re-establishing a stable and credible Zimbabwe dollar would be a tall order. The minimum requirements would include restoring macroeconomic stability; ending government fiscal deficits, and quasi-fiscal operations by the Reserve Bank of Zimbabwe; complete transparency in the foreign exchange market and RBZ operations more generally; and ending compulsory forex surrender requirements for exporters, subsidies for imports, and access to foreign exchange at privileged rates.

Zimbabwe also needs to negotiate a quasi-HIPC (heavily indebted poor country) arrangement with its creditors to reschedule and reduce its foreign debt and re-establish access to international capital markets.

Does Zimbabwe have other currency options that could lead to a sustainable outcome? Given the need to re-establish macro-economic credibility, adopting an external monetary and institutional anchor is almost essential. Back when the multi-currency regime was introduced in 2009, many analysts considered that it would make more sense to adopt the South African rand (ZAR) as the domestic anchor currency, rather than the US dollar. The ZAR is more relevant considering Zimbabwe’s trade patterns, and less likely to lead to competitiveness problems.

The independence of Zimbabwe’s central bank has to be assured and an independent Monetary Policy Committee put in place. Zimbabwe’s Finance Minister, Mthuli Ncube, established this committee in September, but its independence is yet to be tested. Zimbabwe’s government also needs to be consistent regarding economic policy reforms to guarantee some measure of economic stability before they can be considered for the rand monetary union.

While it’s not certain that the Common Monetary Area members would admit Zimbabwe as a member, opening negotiations to explore this option could be the first step in re-establishing currency stability in Zimbabwe. DM