Since relaxing laws for gold digging, violent gangs have run amok across the country, killing hundreds in 2019 alone 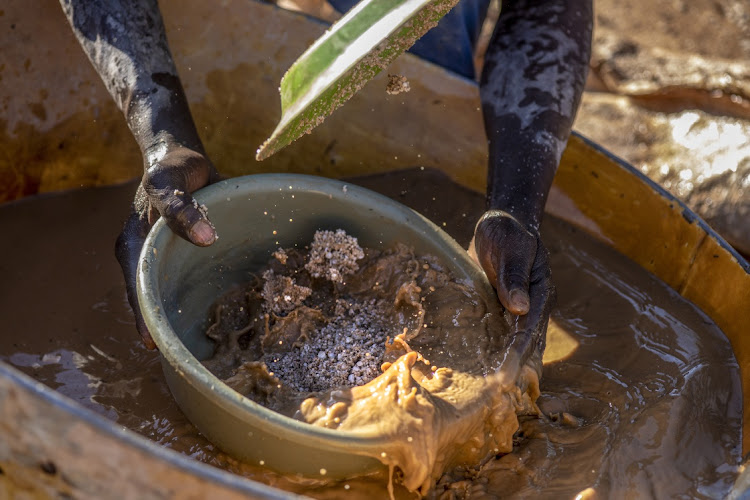 An artisanal miner sifts through crushed ore for gold particles at a small-scale gold mine in Umguza, Zimbabwe. Picture: BLOOMBERG VIA GETTY IMAGES/CYNTHIA R MATONHODZE

Harare — The Zimbabwe Human Rights Commission (ZHRC) warned this week that the rise of gangs fighting over the spoils of artisanal gold mining threaten to destablise the country.

Violence perpetrated by machete-wielding artisanal miners is on the rise in Zimbabwe with hundreds of people killed in 2019 in battles to control small-scale mines.

In a statement on Tuesday, the ZHRC said the gangs must be apprehended. This followed a brutal attack on a police officer guarding a mine owned by a senior official in the ruling Zanu-PF at the weekend, who was hacked to death by gangs armed with machetes and axes.

“The ZHRC unreservedly condemns the callous and unwarranted attack by the unruly and greedy, machete-wielding mob. The law, of course, must take its full course in barbaric instances of this nature. The commission condemns all similar, past and present, barbaric and intentional murders with the contempt they deserve and exhort law enforcement agencies to ensure the law takes its full course in such instances.”

Gold is one of Zimbabwe’s largest earners of foreign currency, raking in more than $1bn in exports annually. With many large-scale miners shunning the country, the government has turned to informal mining to boost production.

The government decriminalised gold-digging three years ago to allow tens of thousands of unemployed people to work on small-scale mines around the country. The latest statistics from the government’s gold-buying entity Fidelity Printers and Refiners show that small-scale miners produced more than 50% of the country’s gold with the government giving full support to the informal operations through loans and authorisations.

The relaxation of laws on illegal mining has given way to an outpouring of violence as the gangs have become a law unto themselves. Police say hundreds of people have been killed across the country in wars as rival gangs fight for control of gold mines.

The gangs are known to use extreme violence to take over mining sites, and sometimes steal gold ore from those they find already operating in a particular area.

In November, the Zimbabwe Peace Project (ZPP) NGO said 105 people had been killed in the mining town of Kadoma in the three months from August to October of 2019, while hundreds of others were severely injured in machete attacks.

In its report “Who will protect citizens from their ‘supposed’ protectors?”, ZPP said the majority of the machete hit squads, known as MaShurugwi, and al-Shabaab, come from President Emmerson Mnangagwa’s home province of Midlands.

In October 2019, the US imposed sanctions on state security minister Owen Ncube, a close ally of Mnangagwa, over what it said was credible information of his involvement in “gross violations of human rights”, reported to be linked to armed gang violence. Ncube has denied the allegations, calling them “the work of my enemies”.

On several occasions, Mnangagwa has threatened action against the gangs, but to no avail. A few weeks ago, justice minister Ziyambi Ziyambi directed police “to shoot to kill the marauding gangs”. However, police have largely failed to stop or control the mob violence. Police officers have also been accused of colluding with the gangs after receiving bribes.