Necessity is the mother of invention, and this rings true in Zimbabwe where the government is reformulating policy. 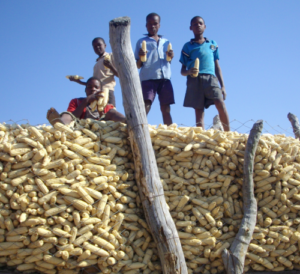 The Zimbabwe government has for years maintained a ban on the importation or growing of genetically modified maize, but the current food shortages in the country have forced the government to change its policy stance. The ban on GM maize imports was lifted on the 31 January 2020 as the country seeks to improve local supplies following yet another poor harvest season.

Zimbabwe’s maize production fell by 53% y/y in the 2018/19 production season to 800,000 tonnes, according to data from the United States Department of Agriculture. This was far below the country’s annual maize consumption of between 1.8 and 2.0 million tonnes. Therefore, the country had to import at least a million tonnes of maize in order to meet the local supply requirements.

But the dearth of timely and credible data has made it a challenge to track the maize importation activity into Zimbabwe. Observing from reports of food shortages at the beginning of 2020, I am inclined to believe that the country was unable to import the required maize volume for the 2019/20 marketing year (this corresponds with the 2018/19 production season which was a drought year).

Zimbabwe imported 100,000 tonnes of maize from Tanzania in 2019, according to Japhet Hasunga, Tanzania’s Agriculture Minister, and 79,283 tonnes from South Africa between May 2019 and January 2020, according to data from the South African Grain Information Services. This data supports my view that Zimbabwe has thus far imported less than the required maize quantities to meet consumption requirements. The slow pace of imports might have been caused by fiscal constraints on the back of the country’s ongoing macroeconomic crisis. The stringent regulations on the importation of GM maize might have also contributed to the slow pace of imports.

South Africa had about 1.2 million tonnes of maize available for export markets in the 2019/20 marketing year which ends in April 2020. However, roughly 80% of its maize is produced from GM seeds. This means that South Africa was inhibited from supplying the Zimbabwean market under its stringent GM policy. This is evident from South Africa’s maize exports data; the country exported 900,585 tonnes of maize between May 2019 and January 2020. But Zimbabwe imported only a 9% share of this total volume.

With international humanitarian organisations such as the World Food Programme actively assisting Zimbabwe to avert the current food crisis, the lifting of the GM maize import ban could accelerate maize import activity into Zimbabwe in the coming months. The maize might originate from South Africa and other leading maize exporting countries such as the United States, Brazil, Mexico and Russia, among others, who have in the past exported maize to Zimbabwe.

The challenge for countries aside from South Africa and Mexico is that they are not major white maize producers, which is the preferred maize variant across southern Africa. Hence, the recent GM policy change will benefit maize exporters from South Africa and Mexico in the near term. Moreover, Zimbabwe’s maize deficit might not end in May 2020, which would have marked the end of its harvesting period. The country’s 2019/20 maize production season began on a bad footing because of delayed rainfall. The plantings were delayed and so far, the area planted and the expected maize harvest in the 2019/20 production season remains unclear, but on the lower end.

Fortunately for Zimbabwean consumers, neighbouring South Africa and other major maize producing countries are expected to remain maize exporters in the 2020/21 marketing year (this corresponds with the 2019/20 production season). The locust infestation in East Africa could limit surpluses from that region, but overall global maize exports remain awash. For instance, at the Agricultural Business Chamber of South Africa (Agbiz), we estimate that South Africa could see its maize harvest improving by at least 11% from the 2018/19 season, reaching 12.5 million tonnes. Here we’ve applied the preliminary maize planting data of 2.5 million hectares (up 10% y/y), at an average yield of 5.0 tonnes per hectare, which is plausible with current soil moisture.

This means South Africa could have more than a million tonnes for export markets in the 2020/21 marketing year, which begins in May 2020. Part of these supplies will help ease pressure on Zimbabwean consumers, and trade should be more free-flowing now with the GM ban having been lifted.

These measures could assist in the near term. In the long run, the Zimbabwean authorities should consider legalising the growing of GM maize in order for domestic farmers to produce higher yields such as South Africa, Brazil, the United States and other GM-growing countries.

The ultimate beneficiaries of such a policy shift would be consumers, as an increase in Zimbabwe’s maize production would lead to relatively lower prices. Moreover, in seasons of unfavourable weather conditions, GM crops wouldn’t be as badly affected as the conventional seeds that are currently grown in Zimbabwe. Indeed, necessity is the mother of invention. DM