Zimbabwe’s promise to begin returning land to farmers who were dispossessed is promising. Will the South African government take some lessons from it? 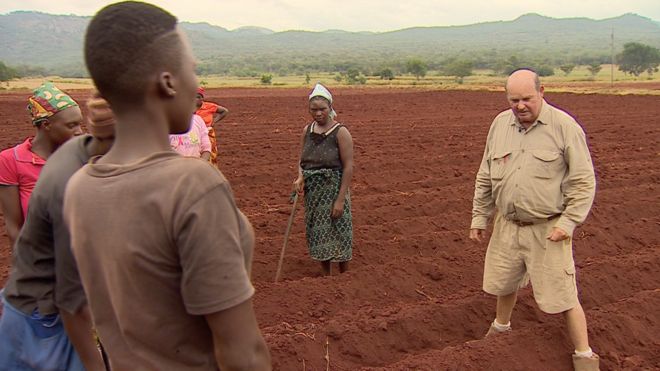 Dave Wakefield, who lost his farm in 2001, has leased land from a black owner

A small, largely ignored, item in the news cycle of recent days came out of Harare: the Zimbabwean government is establishing mechanisms for farmers who were dispossessed during the country’s “land reform” campaign to either reacquire their properties or seek monetary compensation.

This is in line with the drive by the government under President Emmerson Mnangagwa to re-position Zimbabwe as an attractive business partner and investment destination, so as to revitalise its crippled formal economy.

“Zimbabwe,” he declared, “is open for business.” As clumsy and contradictory as their conduct has been, the country’s authorities seem at least to recognise that for Zimbabwe to have a chance at a viable future, it will need to deal with the damage — and arguably, above all, the reputational damage — which the chaotic and sometimes violent land seizures inflicted.

“You have now no strong formal sector structures, you have low levels of productivity, and you have livelihoods that are very precarious — people cannot plan their lives for very long.”

Offering a return to, or payment for, confiscated property should, in theory, both encourage entrepreneurs to re-engage with the country and send a message that the government has learnt a painful lesson about the dangers of economic mismanagement.

What this will mean in practice is open to question. A few farmers had returned over the past few years, and some compensation has been offered. The new offer reportedly extends to “indigenous” farmers whose land was seized, as well as to properties owned by people whose governments had investment protection regimes in place.

Claims for the return of property or compensation may also be rejected “on the basis that granting it would be contrary to the interests of defence, public safety, public order, public morality, public health, regional or town planning or the general public interest”.

Still, it’s a small step, and South Africa’s diplomatic representatives in Zimbabwe were upbeat about this.

“We welcome the development, as we believe there is enough land waiting to be used,” a spokesperson for the South African Embassy told the media. This would be wonderful for commercial agriculture since opportunities would become available to people with skills and capital.

Indeed, South African farmers were interested in what Zimbabwe had to offer.

“While we don’t have the numbers in terms of those likely to benefit,” the spokesperson commented, “we have spoken to a number of South African farmers who already have their own funding to start agriculture activity in Zimbabwe, so this decision is welcome.”

It is welcome that South Africa’s diplomats have come to this conclusion, as it would appear to represent a turnaround of sorts in the country’s position.

Zimbabwe’s economic collapse had much to do with its catastrophic land grabs, but the seeds of this were sown long before: systemic corruption, lack of accountability, political intolerance, and decayed and compromised institutions.

The Zanu-PF government’s “land reform” programme represented not only the confiscation of productive assets — referencing real historical grievances — but also a political assault on the country’s opposition formations and well-nigh anything else that could present a challenge. Hence it is difficult to distinguish the “land” issue from the political and governance crisis that saw elections manipulated, activists arrested and attacked (on occasion killed), the media harassed and the courts ignored.

When the country’s courts attempted to enforce the law on land invasions, then-President Robert Mugabe declared:

“The courts can do what they want. They are not courts for our people and we shall not even be defending ourselves in these courts.”

South Africa’s own role in this tragedy is well known and reflects little credit on the country. Its approach to the “land” question was stand-offish, not directly endorsing the trajectory of events, but standing fulsomely by the Zanu-PF narrative that land lay at the centre of the issue. Zanu-PF’s hold on power in Zimbabwe, it seems, was the South African government’s prime non-negotiable.

As Dr Nkosazana Dlamini-Zuma once memorably said, there would never be a word of condemnation as long as the African National Congress (ANC) was in power. Then-president Thabo Mbeki told an ANC caucus meeting that the Movement for Democratic Change was a creature of the American CIA.

For more measured consumption, South Africa’s position could be presented as a push for stabilisation, economic recovery and development. Mbeki told Parliament in 2001:

“Regarding Zimbabwe, our immediate common objective is to see what contribution we can make to address the economic challenges facing Zimbabwe. We have a common objective to resolve the land question in Zimbabwe so as to stabilise the situation politically and thereby create an environment conducive to economic recovery and development. This we do not only for the people of Zimbabwe, but for the rest of the southern African region.”

This is all deeply ironic. As the crisis unfolded, South Africa was willing to lose a great deal for its Zimbabwe policy. Not only was it unwilling to speak critically or apply pressure, but it was willing to discard the interests of its own citizens (as the case of agricultural entrepreneur Crawford von Abo illustrated), dismantle regional governance institutions (as it went along with the defanging of the SADC Tribunal after it ruled against Zimbabwe) and even sacrifice the ambitious New Partnership for Africa’s Development (Nepad), which had as its key proposition maintaining good governance in Africa as a condition for development support and investment.

That South Africa is now in favour of creating a conducive climate for investment in its northern neighbour — and of safeguarding the interests of South African investors — is to be welcomed. But the scars on Zimbabwe’s economy are deep and stark. South Africa has made no small contribution to them. Much more will be required — a case of rehabilitation rather than reform.

Meanwhile, at home, South Africa’s government makes reckless commitments about the wonders that will come from expropriation without compensation, a process from which it seeks to exclude the courts. Having shown some sense on Zimbabwe, will it do likewise for South Africa? DM