HARARE (Reuters) - Rosemary Pamire struggled to feed her family well before Zimbabwe entered lockdown in March to combat the coronavirus pandemic. Now she can hardly put together a meal a day as the country faces a deepening food crisis. 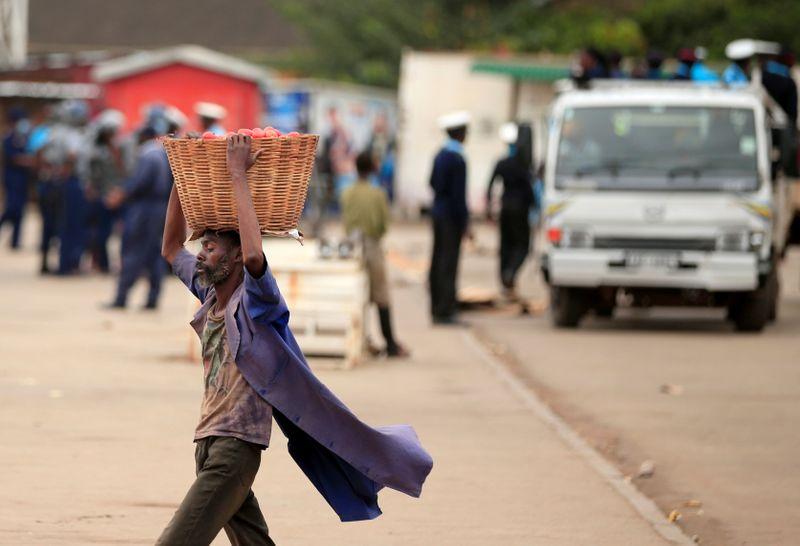 A man carries tomatoes as he runs from police as they destroy street vendor stalls during a nationwide lockdown called to help curb the spread of coronavirus disease (COVID-19) in Harare, Zimbabwe, April 19, 2020. REUTERS/Philimon Bulawayo

Sitting on a bed in her two-room lodgings in Harare’s poor Mbare township, Pamire told Reuters she had exhausted the little food she had stocked up during the first 21 days of an extended seven-week lockdown.

“We just eat once a day now. I wish the government could give us food to feed my family,” Pamire said.

Before the coronavirus outbreak, 7.7 million Zimbabweans faced food shortages after a drought and cyclone in 2019 and patchy rains this year, linked to climate change and worsened by rampant inflation and a foreign exchange shortage.

Now it faces a triple threat of climate breakdown, monetary woes and a new economic crisis caused by the lockdown.

The government has promised a food grant of $2.4 billion Zimbabwe dollars ($96 million) targeting 1 million people for six months, without saying where it would get the money.

It is pleading with donors, who would normally be reluctant to help because of its debt arrears, and this month it received $7 million from the World Bank.

Pamire said she had registered with social welfare officials but she, like many others, has yet to receive anything.

That has left the burden to fend for the family with her 19-year-old daughter Anna, who sells ice lollies and bottled water at Mbare vegetable market at the risk of arrest by police because it is illegal.

“At times in the evening when we don’t have maize-meal, mum will just tell us to have the ice lollies and water and we will just go to sleep,” said Anna.

On a good day Anna sells a pack of ice lollies for 110 Zimbabwe dollars ($4.40). After buying new stock, only $1 is left for the family of seven to buy food, including the staple maize-meal and sugar and cooking oil.

Pamire, who lives with her four grown children and two grandchildren, used to buy clothes and shoes from Zambia for resell at home and earned $100 after a good trip. But the border is closed, her passport expired, and she does not have money to renew it.

The market where Pamire’s two adult sons carted goods around for a fee has been shut for six weeks, just like all informal markets from where millions of Zimbabweans were earning a living.