by Henrik Ellert, Dennis Malcolm Anderson A Brutal State of Affairs analyses the transition from Rhodesia to Zimbabwe and challenges Rhodesian mythology. The story of the BSAP, where white and black officers were forced into a situation not of their own making, is critically examined. The liberation war in Rhodesia might never have happened but for the 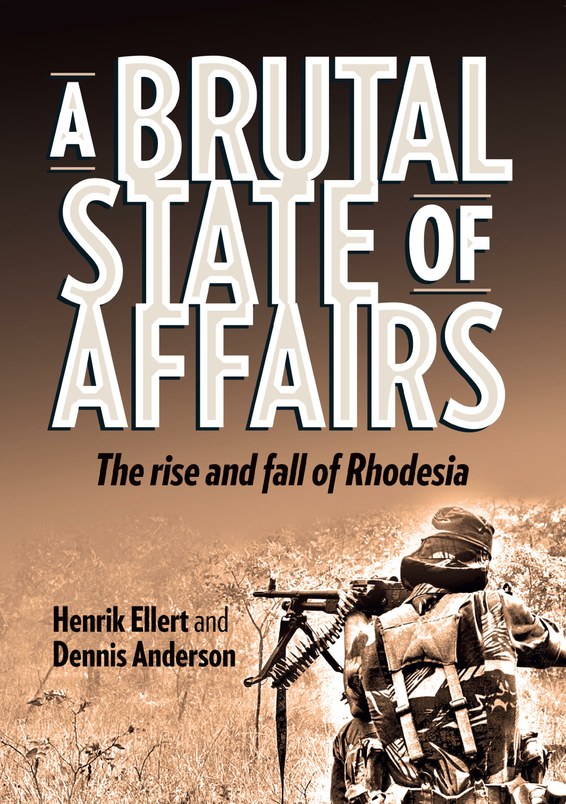 A Brutal State of Affairs analyses the transition from Rhodesia to Zimbabwe and challenges Rhodesian mythology. The story of the BSAP, where white and black officers were forced into a situation not of their own making, is critically examined. The liberation war in Rhodesia might never have happened but for the ascendency of the Rhodesian Front, prevailing racist attitudes, and the rise of white nationalists who thought their cause just. Blinded by nationalist fervour and the reassuring words of the Ministry of Internal Affairs and army commanders, the Smith government disregarded the advice of its intelligence services to reach a settlement before it was too late.

By 1979, the Rhodesians were staring into the abyss, and the war was drawing to a close. Salisbury was virtually encircled, and guerrilla numbers continued to grow. A Brutal State of Affairs examines the Rhodesian legacy, the remarkable parallels of history, and suggests that Smith’s Rhodesian template for rule has, in many instances, been assiduously applied by Mugabe and his successors.

“…an important book that accurately describes the early underground struggle known as Zhanda and how these ZAPU branches survived and played a critical role in the war. A Brutal State of Affairs documents the important contribution to the liberation struggle made by ZAPU’s armed wing, ZIPRA, events which were largely ignored by Mugabe”

I had a lump in my throat as I read this difficult but important book. It chronicles the birth of Zimbabwe out of a savage bush war. Both sides in the conflict committed atrocities and tried to blame them on the other. It is enlightening to read an honest account of what went on behind the scenes. The brutality is stunning – and was made even more difficult for me to read by the fact that I knew many of the victims personally, including my best friend Edson Sithole, Arthur Kanodereka and Father Christopher Sheppard-Smith SJ – my tennis partner.

The gruesome details of how food and clothing were poisoned and distributed in the rural areas, and the use of napalm, make chilling reading.

As Zimbabwe did not have a Truth and Reconciliation Commission it is up to the combatants to tell us the truth about what happened during those dark years.  Henrik Ellert and Dennis Anderson, both Rhodesian CIO officers, have done so admirably in this book.  Some of the revelations will, no doubt, shock those still living. For example, Zapu supporters will be absolutely horrified to learn that their revered hero J Z Moyo was actually a CIO informant before he fled to Zambia in the late 1960s.

During the war the CIO used to advise Ian Smith to negotiate with the black nationalists because he was losing the war. Smith disregarded their reports as “alarmist”. The authors also admit that the Rhodesians killed ZANU chairman, Herbert Chitepo in Lusaka in 1975. Then president Kenneth Kaunda of Zambia set up an international commission of enquiry at the time, which concluded that Chitepo had been killed as a result of internecine warfare within ZANU. How wrong they were! And how cleverly the true culprits covered their tracks!

I was fascinated to learn that the Rhodesian Special Branch knew exactly when Robert Mugabe fled the country in 1975 for Mozambique. The head of Special Branch in Rusape was instructed not to interfere with his “escape”.  We all have believed all these years that Mugabe had pulled off the most brilliant stunt by using a kombi full of white Dominican nuns as cover.

Another startling revelation for me was the deep involvement of the South African military in the Rhodesian war. Not only were they involved in fighting inside the country, they were also involved in external raids into Mozambique, Botswana and Zambia. South African helicopters were used to carry Rhodesian forces to raid Zanla camps in Mozambique and Zipra camps in Zambia. The Rhodesian authorities were always at pains to minimise the involvement of South Africa – and succeeded in hiding the extent of this from the whole world.

The authors delve into how the country was occupied by the “Pioneer Column” in 1890, the attitudes of subsequent generations of whites, how this led to UDI and the consequent rise of African Nationalism.

I really hope this book will inspire other combatants, especially from Zanla and Zipra to record their own experiences of the war – honestly and dispassionately – in the interests of history. We all owe it to future generations to ensure an accurate record of what happened in our day.

Henrik Ellert was born in Denmark but grew up in Kenya during the Mau Mau emergency. He came to Zimbabwe in 1961 and joined the police force in 1964, initially serving two years in the uniformed branch and stationed in Shabani and Hartley, where he gained his first experience with the nationalist guerrilla insurgency after the killing of the Viljoens by ZANLA in 1966. He later transferred to the CID being stationed in Gweru and shortly after joined Special Branch posted to the Chirundu border post where he was involved in Operation Couldron and Griffin and intel collection from Zambia. Returning to the Provincial Special Branch Office, Salisbury and Mashonaland, he was first responsible for border control at Salisbury airport and later on the European desk, rising to head of the section where his work brought him into contact with a wide spectrum of society. Throughout the 1970s he was periodically stationed at JOC Hurricane and, after completing Portuguese language studies, undertook liaison duties with Portuguese authorities in Beira, Tete, Chitima and Mukumbura. In 1978 he was seconded to special duties as UANC liaison on Operation Favour before being transferred as Member-in-Charge of CID/Special Branch Que Que with responsibilities during Operation Grapple and Operation Favour. He retired with the rank of Detective Inspector in 1979.

Dennis Malcolm Anderson was born in London in 1930. Having moved to Rhodesia, he attested in the BSAP on 28 October 1956 and initially served in the uniformed branch at Rhodesville, Salisbury, later joining the CID and then Special Branch, where he became closely associated with nationalist leaders during the course of political rallies in the 1960s. For the first time he came into contact with educated black people, not ‘domestic servants’ or ‘garden boys’, interaction that very few Rhodesians or even his colleagues experienced. He subsequently served in Manicaland province where politically inspired crime became a daily event. In 1967 he was promoted to Detective Inspector and transferred to Salisbury. In the September 1971 he was posted to Marandellas as Member-in-Charge of the CID and Special Branch station. Promoted to Superintendent he was transferred to Salisbury but after a short posting he was transferred to Umtali where he was engaged in counterinsurgency operations with the infiltration of ZANLA into the Chipinga district as the Special Branch JOC officer; he was also the JOC officer on Operation Thrasher. In 1976 he was transferred to Special Branch HQ and posted to the Terrorist desk with Superintendent Pelissier preparing monthly analysis on the war for the Director-General. In 1977 he was transferred to Operation Hurricane as the SB JOC Officer. His final posting prior to retirement in 1979 was to COMOPS.