HARARE (Xinhua) -- Black market rates have surged in recent weeks resulting in concurrent hikes in the prices of basic commodities and a clamour from workers to have wages increased. 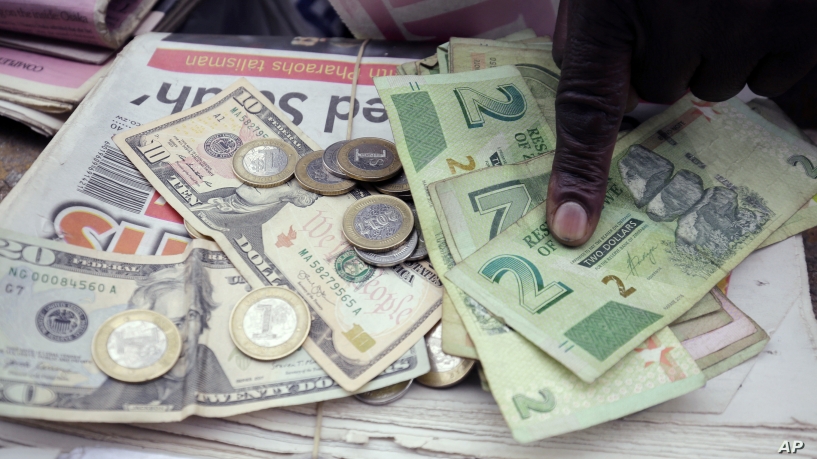 A man counts Zimbabwean dollar notes and coins next to a ten US dollar note on the streets of Harare, Tuesday, June 25, 2019. (AP Photo/Tsvangirayi Mukwazhi)

Amid the COVID-19 pandemic, the government, parastatals and the private sector are all laden with labor issues related to salary increases as the U.S. dollar rate hit over 1: 60 to the Zimbabwe dollar.

Illegal money changers are charging as much as 78 ZWL to 1 U.S. dollar and prices have also been galloping since most of the foreign currency used by manufacturers is acquired on the black market.

The government is due to meet civil servant representatives this week to negotiate the gap between what is being offered by tax collector the Zimbabwe Revenue Authority (ZIMRA) and worker representatives.

ZIMRA has offered the workers a 140 percent salary wage and benefit allowance increase to 3,370 ZWL per month for the least paid for the year while the Zimbabwe Revenue and Allied Trade Union (ZIMRATU) is negotiating for a 1,350 percent increase to 20,362 ZWL for the same.

“As Government we appreciate the need to cushion our workers against the tough economic environment. The NJNC should be meeting as the negotiating forum between government and its employees,” said Mavima.

“They last met in January when a minimum salary was agreed on, but we feel that there has been an erosion because of inflation. The issue of this erosion of incomes is well-appreciated by government,” he told The state-run Sunday Mail.

The Progressive Teachers’ Union of Zimbabwe (PTUZ) said in a tweet at the weekend that among conditions for re-opening of schools during the COVID-19 pandemic was the need to adjust teachers’ salaries.

“Our conditions for re-opening remain the same: a visible plateau viz.COVID-19 cases; testing of all teachers, ancillary staff, learners; provision of adequate PPE; USD520 salary or equivalent,” it said.

According to the Consumer Council of Zimbabwe, the monthly low-income urban family budget for a family of six was about 8,725 ZWL in May, yet the lowest-paid government worker earns about 3,000 ZWL before deductions.

Mavima said the government would not commit to paying its workers in foreign currency as widely expected by the civil service.

“Our position is that we cannot remunerate our workers in U.S. dollars. As government, we cannot run around looking for U.S. dollars when we have just introduced a new currency,” he said.

Zimbabwe Congress of Trade Unions secretary-general Japhet Moyo also told The Sunday Mail that most employers were failing to make salary adjustments according to inflation trends.

“We had this discussion about workers welfare at our Tripartite Negotiating Forum and there are various proposals that we put on the table,” said Moyo.

“The first one was to continuously review the incomes so that they follow inflationary trends. The second one was to see whether authorities can be able to establish an unemployment benefit scheme, because a number of able-bodied people are now unemployed and they need to be assisted,” he said.

He said the National Social Security Authority was tasked with crafting an unemployment benefit scheme to assist those who would have lost jobs.

“And thirdly, we needed to look at our currency reforms. Our view is that if that cannot be done as a short term measure we need to then ensure that incomes are regularly reviewed to follow the trend,” he said.

Employers Confederation of Zimbabwe president Israel Murefu said many businesses were either in intensive care or functionally dead and thus unable to review salaries.

He said the COVID-19 pandemic and the attendant lockdown had severely disrupted operations, markets and production value chains.

“Businesses are not only grappling with survival but escalating costs which threaten business viability,” he said.

“Therefore, given such a scenario, the first rule of thumb is to find ways of recovering and bringing back to life many businesses. Survival is the priority so that jobs or employment can be saved or restored to pre-lockdown levels if possible,” he said.

He also urged employees to exercise restraint when demanding salary reviews as employers had not been spared the economic challenges.

“The currency devaluation and consequent inflation are not sparing the employer. This means employers and employees have to meet each other halfway so that there is a win-win outcome,” he said.