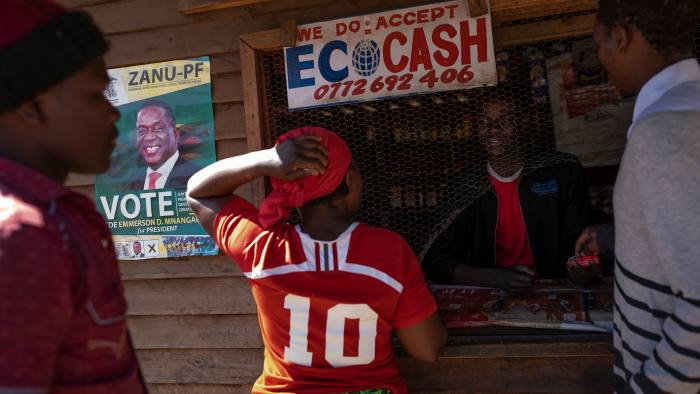 Millions of Zimbabweans rely on mobile money operators, primarily Ecocash, for basic payments because it is difficult to obtain physical cash © Aaron Ufumeli/EPE

Zimbabwe’s Ecocash has defied a government order to suspend transactions after President Emmerson Mnangagwa’s administration accused mobile-money platforms of a conspiracy to sabotage the collapsing Zimbabwe dollar. Ecocash, the country’s dominant mobile money group, said that only the central bank could order such a suspension. “We urge all Ecocash users . . . the majority of whom do not have bank accounts, to remain calm and continue to do your lawful transactions as usual,” the company said. The government ordered the suspension of transactions on mobile-money services, which are the main form of payments in the cash-strapped southern African nation, on Friday.

The Zimbabwe Stock Exchange was also ordered to stop trading, in a dramatic raising of the stakes in the currency crisis. Millions of Zimbabweans rely on mobile money operators, primarily Ecocash, for basic payments because it is difficult to obtain physical cash. The Reserve Bank of Zimbabwe is yet to weigh in on the suspension order. Mr Mnangagwa pledged to be “open for business” when he took power after the 2017 military coup that overthrew Robert Mugabe, the dictator whose misrule kept Zimbabwe isolated for decades. But his government has returned to international pariah status because of repeated abuses by security forces and corruption scandals that have shut off its access to financing. An attempt to revive the Zimbabwe dollar after years of dependence on the US dollar has failed, with little popular trust in the currency.

It has lost almost all of its value in the past year and has traded at about 100 to the US currency in the black market, versus a fixed rate of 25 that the central bank recently abandoned. As a result, inflation has hit more than 750 per cent, leading to a surge in the local stock market as investors sought protection in owning claims on real assets.

Mr Mnangagwa’s government said that it possessed “impeccable intelligence which constitutes a prima facie case whereby the phone-based mobile money systems of Zimbabwe are conspiring, with the help of the Zimbabwe Stock Exchange, either deliberately or inadvertently, in illicit activities that are sabotaging the economy”. “Ecocash, in particular, is acting as the centre pivot of the galloping black market exchange rate and therefore fuelling the incessant price hikes of goods and services that are bedevilling the economy and causing untold hardship to the people of Zimbabwe,” the government said. Ecocash, established by Econet Wireless, the African mobile-phone company founded by Strive Masiyiwa, has come under rising regulatory pressure in recent months.

It has always denied wrongdoing. The Zimbabwe Stock Exchange did not immediately respond to a request for comment. This year the IMF broke off monitoring of economic reforms that could have unlocked international funding for Zimbabwe after it uncovered repeated money-printing by the central bank that hit the currency’s value. Part of the money-printing benefited a company controlled by a close ally of Mr Mnangagwa, according to people familiar with the country’s dealings with the fund. More recently, the government has been embroiled in a scandal over alleged looting of Covid-19 related resources. It says it is investigating the allegations. The Mugabe regime also suspended the stock exchange during the depths of hyperinflation in 2008. Trading resumed in early 2009.