Johannesburg/Harare — When Zimbabwe suspended trading on its stock exchange last week, James Hove was left with no access to the funds he needs to conduct his business. 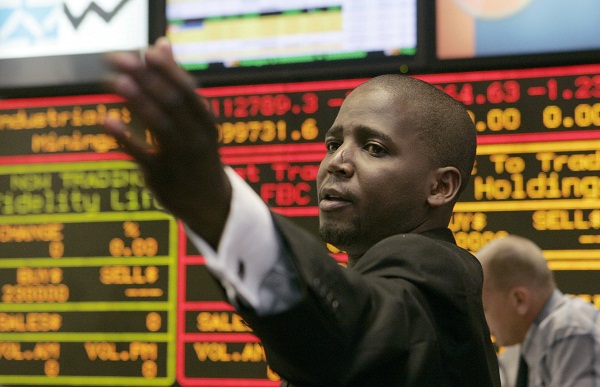 A broker makes a bid at a morning trading session of the Zimbabwe Stock Exchange in the capital Harare. Picture: REUTERS

Like many wealthy Zimbabweans, Hove invests in the local stock market — not for the value he sees in the companies whose stocks trade on it, but as a hedge against surging consumer prices. While annual inflation is at 786%, the benchmark Zimbabwe Stock Exchange (ZSE) industrial index has risen sevenfold this year.

The authorities halted trade because they say speculation, and the use of dual-traded stocks as an indicator of the future exchange rate, are undermining the nation’s currency.

“I’m locked out and I’m not sure how this is legal,” Hove, a 48-year-old property trader, said by phone from Harare. “They’ve just tied up money I really need right now. How can they do this?”

The shutdown of the stock exchange and the suspension of large mobile-money transactions, ordered by the country’s security chiefs, is the latest measure that robs investors in Zimbabwe, both local and foreign, of the certainty needed to make decisions.

Since 2000, when the government began encouraging the violent takeover of white-owned commercial farms, investors have faced the sudden seizure of assets and bouts of hyperinflation. They’ve also suffered a chaotic currency regime that’s in turn caused the abolition of the local currency, its reinstatement a decade later, and overnight conversions of US dollar holdings in local banks into Zimbabwe dollars.

Throughout that period, and indeed since independence in 1980, the country has been ruled by Zanu-PF.

The stock market, which in contrast to the cratering economy has often surged, has been seen as a store of value. Now that’s gone too.

“It’s a clear indication that Zimbabwe’s economy is not normal,” said Tara O’Connor, executive director at London-based Africa Risk Consulting. “The ZSE was the last facade of any normal economic activity. But in closing it, Zanu-PF locks Zimbabwe in — capital and all.”

The closing of the bourse is likely to further complicate the administration’s attempt to drag the economy out of a two-decade slump.

“Investors shouldn’t panic,” said Clive Mphambela, a spokesperson for the Treasury. “The market will certainly reopen.”

Justin Bgoni, CEO of the exchange, said he is working on “getting this out of the way” as quickly as possible.

With his popularity waning, former President Robert Mugabe in 2000 encouraged subsistence farmers to invade the commercial farms that produced much of the country’s exports in the form of tobacco, roses and paprika. What followed was a downward economic and political spiral. A scarcity of foreign exchange hollowed out Zimbabwe’s mining and manufacturing industries as businesses struggled to buy inputs and spares.

The country’s central bank began printing additional bank notes to meet government costs and the currency tanked, leading to inflation of 500-billion percent in 2008 and the scrapping of the Zimbabwe dollar in 2009.

With an increasing proportion of the desperate population supporting the opposition, Mugabe stayed in power through a series of elections marred by violence and irregularities. While he was removed by the military in November 2017, his replacement, Emmerson Mnangagwa, has failed to make good on pledges to revive the economy.

Multilateral lenders such as the IMF have refused to offer the country more money until it pays arrears on $8bn in foreign debt and enacts promised political reforms. Food and fuel shortages are commonplace, civil servants take home a 10th of what they earned two years ago and many Zimbabweans depend on remittances from relatives who have left the country.

“Our intention is to move expeditiously in our reform programme,” government spokesperson Nick Mangwana said in response to questions. “But we have to face the reality that structural and cultural reforms are not an overnight event. There are always unforeseen challenges that slow down the process.”

The local currency, pegged at parity with the US dollar as recently as February 2019, trades officially at 64 to the greenback, but the rate on the black market is more than 100.

Zimbabweans lay the blame firmly at the door of the government.

“They took the farms, then they looted bank accounts, then they told platinum miners to relinquish half their claims,” said John Robertson, an independent economist in Harare. “What they’re saying is, ‘we own everything and we can take it’”.