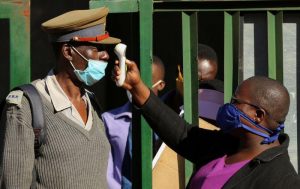 A person checks a policeman’s temperature during a nationwide lockdown to help curb the spread of the coronavirus disease (COVID-19) in Harare, Zimbabwe, May 14, 2020. REUTERS/Philimon Bulawayo

The United Nations and humanitarian partners have revised the Humanitarian Response Plan (HRP) to include response to the COVID-19 outbreak. The COVID-19 Addendum requires US$84.9 million to respond to the immediate public health crisis and the secondary impacts of the pandemic on vulnerable people, in addition to the $715 million required in the HRP.

The 2020 Zimbabwe Humanitarian Response Plan (HRP), launched on 2 April 2020, indicates that 7 million people in urban and rural areas are in urgent need of humanitarian assistance across Zimbabwe, compared to 5.5 million in August 2019. Since the launch of the Revised Humanitarian Appeal in August 2019, circumstances for millions of Zimbabweans have worsened. Drought and crop failure, exacerbated by macro-economic challenges and austerity measures, have directly affected vulnerable households in both rural and urban communities. Inﬂation continues to erode purchasing power and affordability of food and other essential goods is a daily challenge. The delivery of health care, clean water and sanitation, and education has been constrained and millions of people are facing challenges to access vital services.

There are more than 4.3 million people severely food insecure in rural areas in Zimbabwe, according to the latest Integrated Food Security Phase Classification (IPC) analysis, undertaken in February 2020. In addition, 2.2. million people in urban areas, are “cereal food insecure”, according to the most recent Zimbabwe Vulnerability Assessment Committee (ZimVAC) analysis. Erratic and late 2019/2020 rains have impacted the 2020 maize crop, and crop assessment indicates yields and production significantly down. The food gap (import requirement) for a second year running will be close to 1 million tons. Nutritional needs remain high with over 1.1 million children and women requiring nutrition assistance. Already WFP is anticipating greater need for the 2020/2021 lean season and is programming for 4.5 million and 550,000 people in rural and urban communities respectively requiring food assistance support.

At least 4 million vulnerable Zimbabweans are facing challenges accessing primary health care and drought conditions trigger several health risks. Decreasing availability of safe water, sanitation and hygiene have heightened the risk of communicable disease outbreaks for 3.7 million vulnerable people. Some 1.2 million school-age children are facing challenges accessing education. The drought and economic situation have heightened protection risks, particularly for women and children. Over a year after Cyclone Idai hit Zimbabwe in March 2019, 128,270 people remain in need of humanitarian assistance across the 12 affected districts in Manicaland and Masvingo provinces. There are 21,328 refugees and asylum seekers in Zimbabwe who need international protection and multisectoral life-saving assistance to enable them to live in safety and dignity.

As of 9 July, Zimbabwe reported 926 conﬁrmed COVID-19 cases (vs 530 two weeks earlier and 287 one month earlier), including 12 deaths since the onset of the outbreak. Of the confirmed cases, 61 per cent were female and 39 per cent male, 89 per cent asymptomatic and 11 per cent symptomatic. Five provinces account for 80 per cent cases (Harare: 33.4 per cent; Mat South: 15.8 per cent; Mash East: 11 per cent; Bulawayo: 9.9 per cent; Midlands: 8.9 per cent). At least 454 confirmed cases were recent returnees. With the recent increase of COVID-19 transmission in the region, the Government of Zimbabwe is strengthening and accelerating preparedness and response to the COVID-19 outbreak. Following the declaration of COVID-19 as a national disaster on 19 March 2020, the Zimbabwe National Preparedness and Response Plan for COVID-19 was launched with an initial eight pillars of coordination, the creation of a national COVID-19 Response Task Force and the formation of the Inter Ministerial Committee as well as several sub-committees. A high level forum consisting of Task Force and the international community is meeting fortnightly to review progress in tackling COVID-19.

The Government of Zimbabwe declared a 21-day nationwide lockdown starting on 30 March 2020 ensuring the continuity of essential services. Following an initial extension of two weeks until 3 May, the Government announced the easing of lockdown regulations on 1 May allowing formal industry and commerce to resume operations, with speciﬁed measures in effect until 17 May, including mandatory testing and screening of employees whose companies were re-opening or those employees returning back to work for the ﬁrst time since the initial lockdown. The informal sector as well as other sectors, including education, however remained closed. The lockdown was now been extended indefinitely with a review every two weeks. Returning residents and foreign nationals are required to quarantine for a period of 21 days, of which the initial 7 days at Government designated quarantine centres, with mandatory testing on day one and day eight.

As of 7 July, over 10,800 migrants, including 5,982 men, 4,708 women and 196 children, have returned to Zimbabwe from neighbouring countries with the large majority of returnees arriving through the points of entry of Beitbridge border post (5,318), Plumtree (2,741), Harare International airport (1307) and Forbes (646). The number continues to increase daily, with a projection of 20,000 new arrivals in the next coming months with inclusion of those from northern countries such as Zambia, Malawi, Tanzania and Ethiopia. As of 7 July, 1,297 individuals (vs 2,136 on 22 June) were quarantined in 44 centres operated by the Government of Zimbabwe, including 708 men, 494 women, 48 girls and 47 boys. The large majority of returnees were quarantined in Harare, Matabeleland South, Bulawayo, Masvingo, Mashonaland West and Manicaland.

The number of reported pellagra cases has continued to increase in Zimbabwe, with 831 cases recorded from January to May 2020, doubling from 400 cases over the same period last year. Pellagra cases are likely to increase as food insecurity in the country deepens and household income for accessing diversified diets continues to be depleted by the economic crisis.

The unexpected decrease in admission of children for treatment of acute malnutrition that was recorded in April has since improved with 1,643 children being admitted in May compared to 1,168 the previous month. This increase in admissions is a signal that continuity of essential services is being prioritized in health facilities. In addition, 85,947 children received Vitamin A in May, an improvement compated to the drop in April by about 50 per cent due to the disruption in services delivery following the lockdown to contain COVID-19.

In addition to the commitments to the HRP recorded above through the Financial Tracking System (FTS), a number of pledges are in the process of being ﬁnalized, including $30 million for the HRP and $14 million for the COVID-19 response from the United Kingdom, $14 million from the European Commission, and $200,000 from Canada. In addition, carryover funding of agencies from 2019 will be reﬂected in FTS.