HARARE (Xinhua) -- Kneeling on the ground and firmly clutching a hammer and a chisel, Tracy Chatsama continually pounds on a small piece of serpentine stone with the aim of making a hippo sculpture. 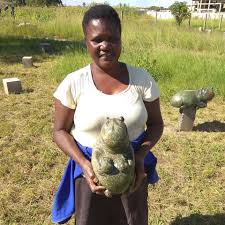 The sheer amount of enthusiasm she displays despite the scotching October heat suggests a great deal of confidence and pride in her work.

Chatsama began stone sculpture at a tender age. Years later, she got married to a sculptor and together as a couple it’s been an artist affair that has resulted in both gaining acclaim.

The trade has allowed the couple to educate their children up to university level.

As one of the few women carving her territory in a predominantly male space, Chatsama said, “I feel great because there is a lot of competition here. I can even sell, I can even come out with my name for myself. I am very proud of that.”

She told Xinhua in an interview at her galley at Chitungwiza Arts Center near Harare that many of her works of art have been exhibited and sold overseas in countries such as Italy, Germany and the United States.

Nicknamed the hippo-lady, Chatsama uses her technical and artistic skills to highlight the universal qualities of motherhood through distinct images of hippos.

Her work adds a new dimension to the uniqueness of Zimbabwean stone sculpture. The powerful images of mother hippos make Chatsama’s sculptures some of Zimbabwe’s most dynamic.

While most of her sculptures are exported to western countries, through middlemen Chatsama, said in the future she hopes to sell her pieces directly to the emerging Chinese market.

“I haven’t managed to exhibit my own pieces there in China, but in the near future, I have a touch in my heart that one day I will penetrate on my own and sell and exhibit in China,” she said.

While artist like Chatsama have managed to amass recognition in a competitive and male-dominated visual arts industry, lack of direct access to the markets means they have to rely on middlemen to make sales.

By relying on middleman for sales, sculptors face various problems that result in underpayment for their work.

“A middlemen can even distort the price that overseas customers offer to pay,” said 52-year-old Winnet Chikazi, another female sculptor at Chitungwiza Arts Center.

She added that the lack of female representation in the visual arts sector has also resulted in women’s work being looked down upon, which has a negative impact on their earnings.

“I wish if we could continue making our art and motivate other women so that we can fend for our families because this art is enabling us to send our children to school,” she said.

Zimbabwe has a rich history of stone sculpture. Works by some of the country’s renowned female artists have been exhibited around the world and great acclaim has accrued to artists such as Agness Nyanhongo and the late Colleen Madamombe.

The country’s famous stone sculpture industry attracts a fair share of foreign visitors every year, contributing to the tourism sector.

Although women constitute a small fraction of contemporary visual arts in Zimbabwe, from ancient times women have participated in the visual arts in diverse and stimulating ways.