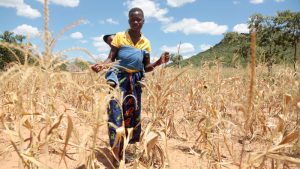 Last year’s drought was one of the worst on record – shrivelling maize in farmers’ fields. (Aaron Ufumeli/TNH)

Land preparation and planting activities for the main 2020/21 cropping season (October-June) are underway. Early rainfall amounts in October were estimated to be mostly above average, boosting soil moisture levels and supporting crop germination.

The rainfall outlook for the November 2020-January 2021 period points to a slightly higher probability of above-normal rainfall, inferring likely conducive conditions for the 2021 cereal crops, although the risk of excessive rainfall and flood damage also increases.

In spite of the overall favourable rainfall outlook, which could support an upturn in yields compared to the reduced levels of the previous two years, economic challenges, aggravated by the effects of the COVID-19 pandemic, are expected to limit the area planted and could adversely affect yields due to an expected reduction in input use reflecting a decline in incomes.

Household-level assessments conducted in May/June showed that incomes had fallen. According to the Zimbabwe Vulnerability Assessment Committee’s (ZIMVAC) evaluation, released in October, it was estimated that the average income of a rural household declined by about 25 percent in April 2020 compared to the corresponding month in 2019 (from USD 44 to USD 33).

The reduced income level, in the context of exceptionally high annual inflation rates that exceeded 800 percent, is expected to hamper farmers’ access to agricultural inputs, including seeds, fertilizers and labour, and could result in a reduction in the planted area compared to the average.

The Government is implementing programmes to support farmers’ access to agricultural inputs, including the Presidential Input Scheme, which is targeting about 1.8 million smallholder farmers, and to promote the adoption of conservation agriculture techniques.

Increased rainfall amounts in the next months are also expected to improve the availability of pasture and water resources for livestock. Mortality rates of cattle were estimated to have increased in 2020 compared to the previous year, largely attributable to the negative impact of dry weather conditions on pasture resources and an increase in the incidences of livestock diseases.

Production of cereals in 2020 is estimated at 1.25 million tonnes, about 13 percent below the five-year average. This output includes the winter wheat crop, which is currently being harvested and is expected at an above-average level, mostly on account of an increase in the planted area.

Production of cereals from the main summer season, with crops generally harvested by June, is estimated at a below-average level of 1.1 million tonnes, despite increasing moderately compared to the previous year’s low level. The reduced harvest was primarily the result of low yields, driven by poorly distributed seasonal rains. Increased outputs of sorghum and millet prevented a larger decline in the national cereal output, reflecting area expansions, as farmers, supported by national institutions, opted to increase production of these drought-tolerant cereal crops.

Due to a second consecutive below-average cereal harvest in 2020 and the low level of domestic stocks, cereal import requirements in the 2020/21 marketing year (April/March) are estimated at about 1.1 million tonnes, more than 50 percent above the five-year average. This quantity is mostly comprised of maize grain, estimated at over 750 000 tonnes, nearly double the average.

Although export availabilities in the region have increased in 2020 compared to the previous year, reflecting large outputs in South Africa and Zambia, the weak currency and the macro-economic challenges that the country faces pose difficulties in terms of the capacity to access sufficient imports.

Despite stabilizing in recent months, the national currency depreciated substantially against the US dollar since the beginning of the year and has consequently inflated import costs.

Moreover, the recently increasing prices in South Africa are likely to raise import prices further; however, prices in Zambia, the second main exporter in the subregion, have been more stable and this could limit overall import costs for the country.