The Crisis in Zimbabwe Coalition condemns the cruel and inhumane actions by the Islamist militants who beheaded more than 50 people in the village of Aldeia da Paz outside Macomia in Northern Mozambique. 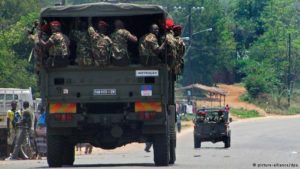 The Islamist insurgency in the Northern part of Mozambique which has stretched from 2017 is a call for collective action by the Southern African Development Community (SADC) and the African Union (AU).

The Cabo Delgado Civil war is indeed a threat to human security not only in Mozambique but the rest of the SADC region hence the need for a collective approach by SADC and the AU in dealing with the insurgents.

Since October 2017 nearly 2 000 civilians have been killed as a result of the insurgency in Mozambique while about 300 000 have been displaced and the humanitarian crisis in the Southern African country continues to worsen.

Damage to infrastructure has also affected livelihoods while internal displacements have the potential to accelerate the spread of COVID 19 given the fact that the Cabo Delgado region has the highest number of Covid-19 cases in Mozambique.

Mozambique is a signatory to the African Union Convention on the Prevention and Combating of Terrorism (1999) and is also part of the SADC regional strategy on countering terrorism developed in 2015 and this allows for support to the Mozambican government in dealing with the Islamist insurgency.

More importantly, SADC must invoke Article 6(1) of the SADC Mutual Defence Pact which considers an armed attack against a member state as a threat to regional security.

Crisis in Zimbabwe Coalition implores the SADC Organ on Politics, Defence and Security to convene an urgent meeting whose objective shall be to formulate a crisis response plan and strategies for military deployment in Mozambique.

Acts of terrorism have no place in a civilised society and we stand with the people of Mozambique in condemning these cruel and cowardly acts.