Ugandan dictator Museveni betrayed Qadhafi and Mugabe to the U.S 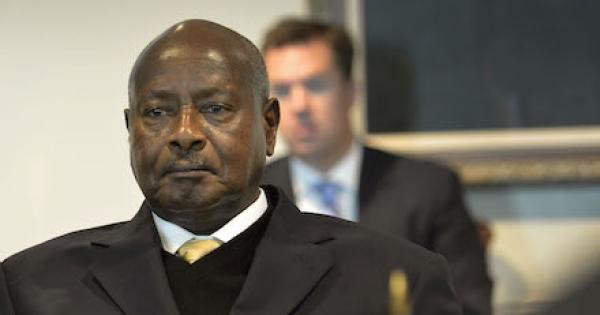 Uganda’s dictator of 35 years in power Gen. Yoweri Museveni likes accusing leading presidential challenger Bobi Wine of being a Western tool yet Wikileaks documents show that he’s always been so close to the U.S. that he even betrayed Libya’s Qadhafi and Zimbabwe’s Robert Mugabe to the Americans.

The documents also undermine Museveni’s public claims that he’s a Pan-African nationalist—in private he has behaved like an African turncoat in the mode of Mobutu, and Moise Tshombe , both of whom famously betrayed Patrice Lumumba and had him murdered in 1961.

Three years after Museveni told U.S. Assistant Secretary of State for Africa Jendayi Frazer that Qadhafi was a “problem” for Africa because he wanted to unite the continent under one president, the U.S. and NATO eliminated the problem by invading Libya and killing Qadhafi in 2011. In addition to betraying Qadhafi to the U.S.—even though the Libyan had provided hundreds of millions of dollars to his regime and even supplied him with weapons while he was fighting for power in Uganda—Museveni also told the Americans the best way to undermine Mugabe was to attack him on his country’s economic performance.

The Wikileaks documents are the strongest indication that Gen. Museveni was possibly a CIA agent who ratted on other African leaders, much like Congolese dictator Mobutu did from 1960 to 1997 when he was deposed. Mobutu became a CIA agent in 1959, one year before Congo’s independence from Belgium. The U.S. backed him for 37 years.

Museveni also asked the United States to provide him with international airspace protection during his overseas travels to prevent Qadhafi from having his plane shot down, the documents show. “President Museveni said Libyan President Qadhafi ‘is a problem’ for the continent and is pushing for the creation of a ‘United States of Africa’ to be governed by one president. Museveni thought Qadhafi’s plan is neither feasible nor desirable, given cultural and linguistic differences across the continent. Rather than the development of a unitary African state, Museveni said he is pushing Qadhafi and other African leaders to develop regional political federations and markets that support common objectives,” the Wikileaks documents state.

Museveni, who is notorious for traveling around Uganda with brown bags stuffed with cash to buy votes and political and religious leaders, also complained to Frazer that Qadhafi “continues to ‘intimidate’ small  African countries through bribes and other pressure. As a result of Libya’s actions, small West African countries have been afraid to participate fully or speak out during international meetings at the United Nations, African Union, and other forums.”

“Museveni noted that tensions with Qadhafi are growing and as a result, and he worries that Qadhafi will attack his plane while flying over international airspace,” the Wikileaks documents add. “Museveni requested that the USG and GOU coordinate to provide additional air radar information when he flies over international waters.”

Museveni also told Assistant Secretary Frazer that he’d spoken with Mugabe by phone after the 2008 election when challenger Morgan Tsvangirai won 47.8% to Mugabe’s 43.2%, forcing him into a runoff, which the challenger abandoned, citing regime violence. “During his call, Mugabe told Museveni he was confident he would win in the second round of elections. Mugabe told Museveni he did not want election monitors from countries that were ‘hostile’ to Zimbabwe, but wouldn’t mind observers from other countries,” the Wikileaks documents continue. Frazer told Museveni that she believed “thousands of monitors were necessary, especially in rural areas, to encourage people to vote,” in Zimbabwe.

So the Ugandan dictator was discussing the possibility of sending thousands of monitors to Zimbabwe while he himself continues to oppose them in Uganda, including for the Jan. 14, 2021 vote when many political observers predict he will likely lose in a landslide to challenger Bobi Wine.

Museveni also had another suggestion for the U.S. about how to undermine Mugabe’s government. “Museveni thought Zimbabwe’s faltering economy and Mugabe’s poor understanding of the private sector were at the root of Zimbabwe’s political problems,” the Wikileaks documents said. “He said a discussion of the economy would provide an entry point to tell Mugabe that he has failed and is embarrassing liberation leaders. He noted that Mugabe is unwilling to take calls from most African leaders saying they are not his age-mates.”

The meeting between the Ugandan dictator and Assistant Secretary of State Frazer occurred on June 13, 2008 in Fort. Leavenworth, Kansas. Museveni had gone there to attend the graduation of his son Muhoozi Kaenerugaba from the U.S. Army Command and General Staff College. Kaenerugaba is today the regime’s leading human rights abuser, commanding the notorious Special Forces Command (SFC). The SFC has been responsible for attacks on, and killings of unarmed Uganda civilians. It was also involved in a 2018 attack that led to the brutal beating and torture of Bobi Wine.