Minister Nosiviwe Mapisa-Nqakula’s September flight to Zimbabwe has earned her “sufficient sanction” in President Cyril Ramaphosa’s words, but it appears the so-called “Uber flight” is not going to go quietly into the night. 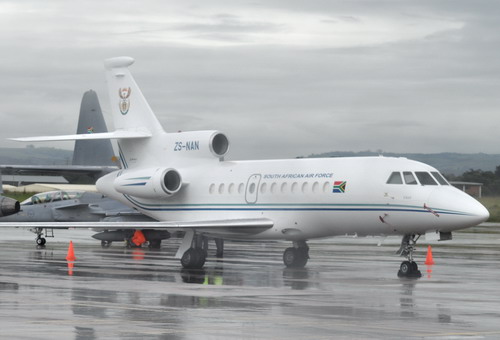 This after newly appointed Secretary for Defence, Ambassador Gladys Kudjoe, responded to a Promotion of Access to Information Act (PAIA) application lodged by shadow defence and military veterans minister, Democratic Alliance (DA) parliamentarian Kobus Marais. He was the first public representative to blow the whistle on potential wrongdoing in connection with the September flight to Harare from AFB Waterkloof by the Falcon 900 (ZS-NAN) operated by the SA Air Force’s (SAAF) 21 Squadron.

The Secretary for Defence, according to a statement issued by Marais, submitted an affidavit “confirming no minutes exist of the supposed meeting between Minister Mapisa-Nqakula and the Zimbabwean Minister of Defence and War Veterans Affairs, Opah Muchinguri-Kashiri, on 9 September 2020 in Zimbabwe”. It goes on to state the Ministerial meeting was verbal and “no minutes were recorded”.

An irate Marais asks, not necessarily rhetorically: “How can there be no minutes to such an important, urgent meeting that warranted the breaking of Ministerial handbook rules to attend it? It is common best practice to record meetings of Ministers on international missions and surely a meeting deemed important enough to organise in a matter of days would not be the exception”.

Answering himself he opines “the only conclusion is such a meeting between the Ministers never took place, because the Minister and her ANC hitchhikers were never in Zimbabwe on State business”.

“Their only business was in service of the ANC and the meeting between Ministers Mapisa-Nqakula and Muchinguri-Kashiri was concocted in a poor attempt to fool taxpayers who footed the bill for the abuse of State resources.”