The country that used to be the breadbasket of Africa might be on a comeback journey. 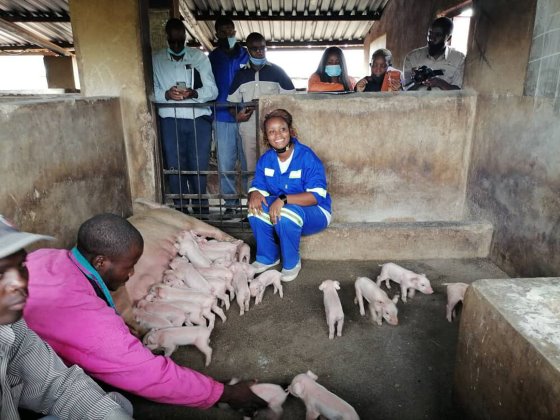 Pride as a new African record was set at 31 piglets/sow/year. – Photo: Kimberley Nyatanga

The small-scale pig production in Zimbabwe is on the rise. The country that used to be the breadbasket of Africa might be on a comeback journey.

The first 5 articles are on us. This is article number 0 this month. After those we like you to register using an e-mail address so you get instant unlimited access to all our articles. Simple, fast and easy.

Through financial support from the European Union amounting to € 40 million, the Zimbabwe Agricultural Growth Programme (ZAGP) was established in June 2019. ZAGP is addressing the challenges affecting pig production, with the goal of turning pig farming into a vibrant sector that contributes significantly to the country’s economy.

According to the agricultural magazineFarmers, the Tarara farm in Zimbabwe (one of the beneficiaries of the ZAGP) situated in Mashonaland East province, has beaten the Zimbabwean and African record of born alive piglets per sow. A group of journalists and several stakeholders in the agriculture sector visited the farm on December 1, 2020.

The sow which is a Dalland/ Large White crossbreed gave birth to 31 piglets – this was her 7th parity. The sow was naturally mated to a Large White/Duroc boar. The new breeding stock (acquired through the ZAGP programme) is expected to be a game changer for the local pork industry; instead of getting 9 to 10 piglets, which is the average with most Zimbabwean breeds, the new pigs are expected to farrow between 18 and 20 piglets.

The Tarara farm is a 12-sow unit with one boar. For the new-born piglets, the farmer is using split suckling in batches, coupled with milk replacers and a home-made colostrum.

The main challenges include inferior breeds, unavailability of funding, high feed and drug costs, persistent droughts, lack of management skills, insufficient extension services, and marketing policy bottlenecks. Another challenge is the shortage of electricity, most piglets die from cold, and crushing by the sow as they try to seek warmth from the sow.

Most farmers think the installation of biogas digesters would be a better solution, however, lack of funds is a repellent factor. Kimberly Nyatanga, co-owner of the Tarara small-scale pig farm narrates about some of the challenges.

Zimbabwe’s pig industry is set for a boom as the US$ 40 million facility availed by the EU is set to run for four years through the Zimbabwe Agricultural Growth Programme (ZAGP). The EU-funded ZAGP initiative is designed to address the bottlenecks in pig production by enhancing production and productivity, easing access to viable markets, and improving breeds. The goal is to upscale subsistence producers to commercial stage. ZAGP is also covering beef, dairy, poultry, and goats throughout the whole country.

According to a recent Reuters report, the government of Zimbabwe stated that foreign white farmers settled in Zimbabwe whose land was seized during the land redistribution programme, can apply to get it back and will be offered land elsewhere if restitution proves impractical.

Zimbabwe agreed to pay US$ 3.5 billion in compensation to local white farmers whose land was forcibly taken by the government. Although expectations are mixed, it is well-documented that commercial farmers highly contribute to the agricultural economy of the country.