Linda Shaba made history for Zimbabwe chess when she came a credible fourth in a star-studded field of players who took part in the Africa online individual rapid chess championships which took place from the first of February to the 5th of February. 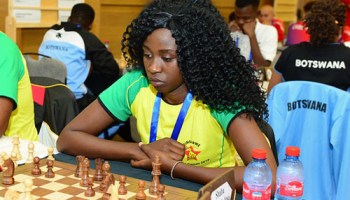 The tournament featured Africa’s best females and she came fourth. The National team chess player has been improving by each outing as she manages to bring home the bacon. For her efforts she won $500.00 US dollars.

This rich tournament was the first individual online chess tournament in this year. This tournament of this magnitude was first introduced sometime last year when the world chess governing body introduced the game in the Olympiads as well as the Online zonal chess tournaments. The tournament was as a result of the Covid-19 pandemic which led some players to fight over the pad and live online which was a very strategic way as well as innovative way of playing the game of chess.They played 25 minutes and ten seconds per player in this online tournament. she could not hide her joy after her sterling performance.

Shaba finished with 6.5 points out of nine games of play. At one time people thought that Kudzanai Charinda would run away with a better prize until she faltered towards the final games as she lost a pulsating end game which had Bishops of opposite colours in a seemingly balanced position which she misplayed under time pressure. Eventually she came tenth with 5 points out of nine games of play. The Mashoko brothers William and Benjamin played in the under 20 category finishing on the 30th and 40th positions respectively.

The writer have attached a game which was analysed by Tapiwa Gora on YouTube which features our national competitor Linda Shaba and her exploits in the game of chess in an online chess game which she played. This was one of her best games.