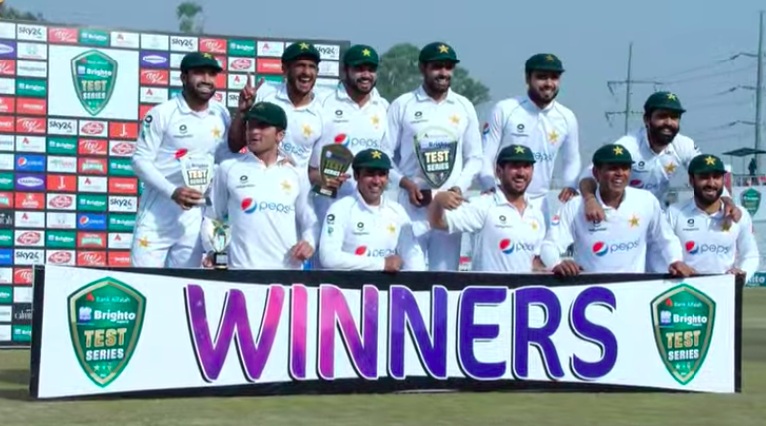 In the pursuit of a 370-run target to win the match, South Africa were bowled out for 274 runs in the second innings.
Hasan Ali picked up 5 wickets in the second innings as well, taking a 10-wicket haul in the match for 114 runs. It was the first 10-wicket haul for a Pakistani bowler in 15 years.
The left-army Shaheen Shah Afridi bagged 4 wickets in the second innings while Yasir Shah also added one more wicket to his tally. For South Africa, Aiden Markram remained the highest scorer in the second innings with 108 runs followed by Temba Bavuma with 61.
In both of their innings, Pakistan scored 272 and 298 runs respectively while South Africa put 201 and 274 runs on the board. The wicket-keeper batsman Mohammad Rizwan also smashed his maiden Test Century for Pakistan in the second innings and remained not out for 115.
Earlier Pakistan won the first Test match against South Africa at National Stadium in Karachi by 7 wickets. With the victory in the Test Series, Pakistan have now jumped to 5th Spot in ICC Test Rankings – their highest ranking since January 2017.Day by Day Report:
04 Feb – day 1 -Pakistan 1st innings 145/305 Feb – day 2 -South Africa 1st innings 106/406 Feb – day 3 -Pakistan 2nd innings 129/607 Feb – day 4 -South Africa 2nd innings 127/108 Feb – day 5 -South Africa 2nd innings 274/10 (91.4 ov) – end of match
The series against South Africa — who were touring Pakistan for the first time in 14 years — is the biggest hosted by the home side since a deadly 2009 militant attack on Sri Lanka´s squad in Lahore halted international tours.
The two teams will now play three Twenty20 internationals on February 11, 13 and 14, all in Lahore.—Wasim Qadri, Islamabad based Senior Sports Journalist and Television Show host, can follow on twitter at @jaranwaliya
Post published in: Cricket