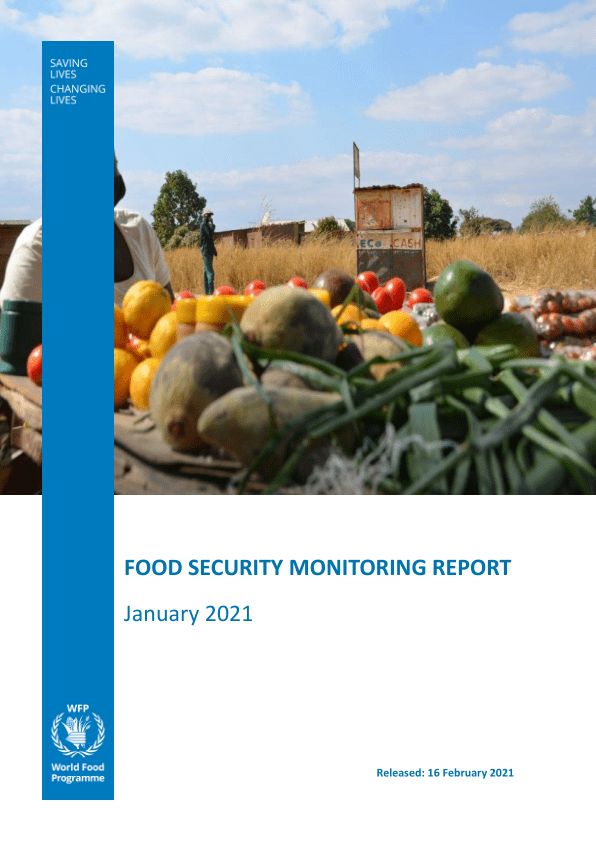 The Government of Zimbabwe reintroduced lockdown measures of level 4 on January 06, 2021. The initial 30- day period was extended by a further 15 days up to the 15`° of February 2021 and the situation will be reviewed during the month of February.

Parts of the country received above-normal rainfall during the month of January, leading to waterlogging in some parts of the country. Crop and livestock condition was reported to be good in most districts with harvest expected to start in April.

A slight increase in annual inflation was observed from 349% recorded in December 2020 to 363% in January after it has been on a downward trend since August 2020. food inflation remains the main driver of inflation in the country, which increased from 346% in December to 369% in January 2021.

The Hunger Map for Zimbabwe for the month of January 2020 continued to reflect an improvement in the estimated number of people experiencing very high prevalence of insufficient food consumption, from the 5.54 million people reported during the last week of December to 4.9 million during the last week of January 2021. The improvement is linked to an increase in the coverage of food assistance, an increase in agricultural labour opportunities and availability of local produce from green harvest among other factors.

Supply of maize grain on the formal markets remained critically low, estimated to be available in only 4% of monitored markets, while availability of maize meal increased from an average of 61% in December to 72% in January.

In ZWL terms, prices increased by an average of 11% in comparison to those reported in December 2020. Specifically, maize grain increased by 9%, maize meal by 12%, sugar beans by 11% and cooking oil by 13%.

Prices in USD increased by an average of 9% compared to December 2020 with highest prices increases reported for maize meal (12%) and vegetable oil (10%).