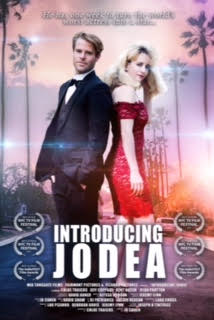 The film, directed by J.D Cohen, tells the story of a struggling unemployed actress Jodea  (Traicos)  whose fortunes change after a world famous movie director Zac Kawalsky ( Jeff Coppage) drives into the back of her car. Desperate she takes this chance to  beg for a role in his latest movie.

After auditioning disastrously Zac initially refuses. However when his agent, Grant  (  Kent Hatch) bets Zac that he could never get a performance out of Jodea,  Zac rises to the challenge and tells Grant he will make her a star within the week.

Amidst the hilarity of the calamitous acting lessons, a romance soon develops between this legendary Hollywood director and this actress who is not nearly as talented as might first appear.

The film had a remarkable opening at the festival where it carried off the awards of Best Picture, Best Director, Best Actor and Best Actress.

It’s gone on to meet success at other film festivals including Indiefest (where Chloe also won Best Actress) and has been selected for the New York Oniros Film Awards.

A trailer to the film can be found below: