Sean Williams scored his 3rd Test hundred and shared partnerships worth 71 and 75 with Sikander Raza (43) and Regis Chakabva (44) against Afghanistan. 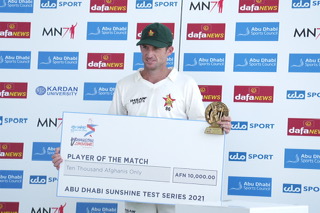 After Match Winning skipper and Player of the Match Sean Williams said that  “It was a fantastic team performance. I was really happy with my seam bowlers. Obviously, it was a difficult wicket to bat on, but these challenges come in Test cricket. If we take them head-on, we’ll succeed. Test cricket can swing in a couple of games.

In this game, the senior players came to the party, which is what I want. The younger guys will learn from it. (Partnership with Raza) He took the role of being more aggressive than I did. I had to deal with a bit more spin than him. I was just happy to see the senior players stand up,” Player of the Match Sean Williams said at the presentation ceremony.—Wasim Qadri, Senior Sports Journalist and television Show host based in Islamabad, can be follow on Twitter at @jaranwaliya